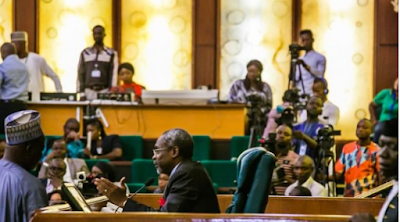 The Speakership position of Hon. Femi Gbajabiamila has come under intense threat as members of Global Integrity Crusade Network, GICN under the auspices of Coalition of Civil Society Organization for Justice and Equity, CCSO-JE, have asked the Federal High Court sitting in Abuja to order the Independent National Electoral Commission to withdraw the Certificate of Return issued to Gbajabiamila as member representing Surulere I Federal Constituency of Lagos State.

Incorporated Trustees of the Network, in a public interest suit, sought for Gbajabiamila’s seat in the House of Representative to be declared vacant on account of him purportedly not being qualified to contest in the 2019 election, having allegedly lied under oath for purposes of contesting the 2011 election that he was not in the last ten years before then convicted and sentenced for an offence involving dishonesty.

This group stated that Gbajabiamila’s claim flies in the face of the judgment of the Supreme Court of the State of Georgia, USA led by Chief Justice Leah Ward Sears showing that he was truly convicted on 26th February, 2007 for fraud involving the sum of $25,000 which the Speaker was said to have collected as personal injury claims from an insurance company due to one Ms. Hadyatou Barry but failed to disburse to her in the year 2003 in USA, where he was practising as an attorney.


In its Originating Summons filed pursuant to Order 3 Rules 6, 7 and 9 of the Federal High Court (Civil Procedure) Rules, GICN also asked the court to compel the Nigeria Police Force to arrest and prosecute Gbajabiamila for the offence of perjury having allegedly lied under oath in EXHIBIT GICN 10, which he submitted to INEC for purposes of contesting the 2011 General Elections that he was not in the last ten years before then convicted and sentenced for an offence involving dishonesty.

Aside Gbajabiamila, who is the first defendant in the suit, other defendants are the House of Representatives, Clerk to the National Assembly, the All Progressives Congress, APC, the Independent National Electoral Commission, INEC, and the Nigeria Police Force, who are the second, third, fourth, fifth and sixth respondents, respectively.

Meanwhile, the case which came up for mention on Monday, 17th June, 2019 before Honourable Justice Inyang Ekwo of the Federal High Court 6, saw Edward Omaga, Esq. leading Abiodun Sodiq Babalola, Esq. and Joseph Chinelo Nwaegbu, Esq. announcing appearance for the Plaintiff who was represented in court by their Secretary, Board of Trustees, John Obor, Esq.

When Omaga sought to move Motion Exparte seeking abridgement of time, amongst other reliefs, one Barr. Adedeji with Barr. Ope Adeyemi from Lagos entered appearance for Hon. Femi Gbajabiamila being the 1st Defendant. They applied to receive service of all the originating processes on his behalf, thus necessitating withdrawal of Prayer 2 on the motion paper seeking to serve Hon. Gbajabiamila by substituted means vide Leadership and Daily Trust newspapers. Meanwhile, as a way of erring on the side of surplusage the Plaintiff has mobilized bailiff of court to serve all parties with both the originating processes and Enrolled Order for abridgement of time.

The Court, whilst adjourning the suit to Monday, 1st July, 2019 for further mention, ordered the Plaintiff to serve parties within seven days to enable them to respond within the abridged period of fourteen days instead of the thirty days allowed by the rules.