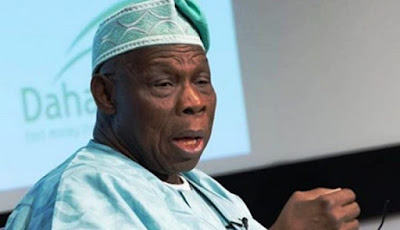 Former President Olusegun Obasanjo has stated that developed countries willing to do business with Nigeria were scared by insecurity and corruption.

He has also raised the alarm over the 13 million children who are out of school in the country and advocated for the re-introduction of a shift programme in the educational system of the country in order to cater for those roaming about the streets.

Addressing Nigerian youths under the aegies of the National Youths Council of Nigeria (NYCN) who had visited him at his Abeokuta residence, Olusegun Obasanjo Presidential Library (OOPL), Abeokuta, the Ogun State capital, and honoured him as “Father of the Nation”, Obasanjo said that if he hadn’t had a formal education he wouldn’t have been opportuned to engage in both the national and international assignments he has found himself.

“Most of these developed countries want to do businesses with us but almost all of them are afraid, because of insecurity and corruption in the land.

“We behave like ostrich that buries its head in the sand.


These developed countries know us more than ourselves.

As a result, we shouldn’t keep saying or do things that will make us a laughing stock.

“God has given us a country, no matter what you feel about Nigeria.

“Don’t let us fall into the primordial life of breaking this country along ethnicity and religion. Let every Nigerian stand firm and say it is my country, because we have no alternative,” he explained.

“Let us do things that will take us to the promise land,” he added.

He stated that he felt sad that more than 13 million Nigerians are out of schools.

To address the malaise, the former President said he has at various times called for interventions, one of which was the re-introduction of the shift programme in the educational system of the country.

“I have on several occasions called for interventions in the educational system of the country.

“The government only needs to re-introduce the former shift programme. In doing this, there will be morning and afternoon shifts for the students.

He urged the Nigerian youths not to let anybody tell them they are young to rule the country.

“I started making my meaningful contribution to this country in 1960. I was under 24 years old when I participated in the Congo war. By the time we had civil war I was under 35 years and when I became the Military Head of State, I was under 40 years
old.

“During my own time, I was given opportunities to go through trainings and also to face challenges.

“You are to prepare yourself to accept whatever opportunity that comes your way and also be prepared to face the challenges of life.

“I have traveled far and wide outside the country, and the people outside there are not better endowed by God, but set things right. They get a few things right and do them right.

It is a two-way thing, consistency, and continuity. We got it right in Universal Basic Education (UBE), primary healthcare and many others. When we were in government, we had laws and policies that underpinned Federal Character.

In his own remarks, the President of the Youths Council, Niyi Oladele, commended the former President for laying the solid foundation for the current democracy to thrive.

“Your interventions in addressing corruptions through the establishment of the Anti-graft agencies, such as Economic and Financial Crimes Commission (EFCC) and Independent Corrupt Practices and Other Related Offences Commission (ICPC), power and energy sector are too numerous to mention which successive administrations have built on them.

“You are a detribalised Nigerian, because you carried everybody along, while you were in the saddle. You also encouraged youths participation in your government through appointments in several offices,” he added.