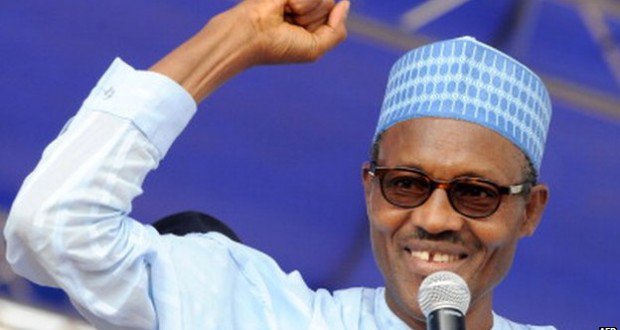 President Muhammadu Buhari on Wednesday honoured the winner of the June 12 1993 presidential election, the late Chief MKO Abiola, by renaming the Abuja National Stadium after him.

The President said this in a speech he read at the first National Democracy Day celebration in Abuja, stating that he approved June 12 as the nation’s Democracy Day as part of the healing and reconciliation efforts for the annulment of the presidential election.

He also said with purposeful leadership, the Federal Government could move 10 million Nigerians out of poverty in 10 years.


But the opposition Peoples Democratic Party and its presidential candidate in the 2019 election, Atiku Abubakar, said it was sad that the country was celebrating Democracy Day under Buhari, whose policies they claimed negated the June 12 spirit and ideals of the late Abiola.

But in Abuja on Wednesday, Buhari honoured Abiola at the event witnessed by some of the children of the late politician, including Kola and Hafsat.

The Ooni of Ife, Oba Enitan Ogunwusi and Oluwo of Iwo, Oba Abdulrasheed Akanbi were some of the invited monarchs for the ceremony.

Apart from honouring Abiola, the President also addressed diverse national issues and unfolded his government’s agenda on insecurity, economy and social security initiatives in the next four years.

Buhari said, “As we all know, correcting injustice is a pre-requisite for peace and unity. As part of the process of healing and reconciliation, I approved the recognition of June 12 as Democracy Day and conferred on the late Chief MKO Abiola and Babagana Kingibe national honours, as I did with the late Chief Gani Fawehinmi.

“The purpose was to partially atone for the previous damage done in annulling the Presidential election of that year. Today, I propose the renaming of the Abuja National Stadium. Henceforth it will be called Moshood Abiola National Stadium.”

Buhari noted that terrorism and insecurity had become worldwide phenomena, noting that even the best policed countries were experiencing increasing incidents of unrest.

He however said the security challenges facing the country were being met with superior strategy, firepower and resolve.

According to him, most of the instances of inter-communal and inter-religious strife and violence were sponsored or incited by ethnic, political or religious leaders, who he claimed, hoped to benefit by exploiting divisions and fault lines, thereby weakening the country.

The President said, “When I took the oath of office on May 29, 2015, insecurity reigned. Apart from occupying 18 local governments in the North-East, Boko Haram could at will attack any city including the Federal Capital Territory, could threaten any institution including bombing the United Nations building and the Police headquarters in Abuja.

Buhari said as the chairman of ECOWAS, he would host a regional security summit of heads of states in the Sahel to develop a joint strategy to address security challenges in the region.

The President added that Nigeria had all ingredients to become a world leader.

“We have water, arable land, forests, oil and gas and vast quantities of solid minerals. We are blessed with an equable climate. However, the bulk of our real wealth lies in agriculture, livestock, forestry and mining. We possess all the ingredients of a major economic power on the world stage.

“What we require is the will to get our acts together. And our strength is in our people – our youth, our culture, our resilience, our ability to succeed despite the odds,” he added.

On the fight against corruption, Buhari said a lot of progress had been made, stressing however that corruption had found a way of fighting back.

He said, “At the heart of inequality and insecurity, is pervasive corruption. When we took office we realised that if you fight corruption, corruption will fight back – and we have seen this at all levels. For Nigeria to progress, a collective resolution to address corruption and foster broad-based prosperity is required to create a country that is not only for a few privileged, but for all Nigerians.”

He said the Manufacturing Purchasing Managers Index, which he claimed was the gauge of manufacturing activity in the country, had also risen for 26 consecutive months since March 2017.

This, he said, indicated continuous growth and expansion in the manufacturing sector.

Buhari however bemoaned the poor condition of roads leading to the nation’s seaports, which he said, had affected productivity.

According to the President, the new mandate that Nigerians gave him through the last election had revived the will to rebuild and reposition Nigeria through collaboration with states, council areas, legislators and diplomatic corps.

He also noted that Nigeria would improve on initiatives to reduce reliance on imported products and grow local production.

Buhari said, “For small-scale enterprises in towns and cities, we shall expand facilities currently available so that we continue to encourage and support domestic production of basic goods and reduce our reliance on imported goods.

“For the next four years, we will remain committed to improving the lives of people by consolidating efforts to address these key issues as well as emerging challenges of climate change, resettling displaced communities and dealing decisively with the new flashes of insecurity across the country, and the impacts on food scarcity and regional stability.”

Buhari said over the next four years, his government would assemble a strong team to implement its transformative plans in education, health, power, road construction and other sectors.

He said, “We will see significant focus, resource and where necessary reform, in tertiary and technical education to reposition Nigeria’s workforce for the modern technological age. We will accelerate investments in primary, secondary and tertiary healthcare programmes.”

Also, Buhari said the APC-led Federal Government could move 100 million Nigerians out of poverty within 10 years.

“In the face of these challenges, our government elected by the people in 2015 and re-elected in March has been mapping out policies, measures and laws to maintain our unity and at the same time lift the bulk of our people out of poverty and onto the road to prosperity.

“China and Indonesia succeeded under authoritarian regimes. India succeeded in a democratic setting. We can do it.

“With leadership and a sense of purpose, we can lift 100 million Nigerians out of poverty in 10 years.”

Meanwhile, former President Goodluck Jonathan has said the Federal Government is being economical with the truth by claiming that Buhari is the first Nigerian leader to honour Abiola.

Jonathan in a statement by his media aide, Reno Omokri, on Wednesday said this claim was ridiculous as he renamed the University of Lagos after Abiola during his tenure.

He said, “This is a ridiculous assertion as the facts will prove…Between the National Stadium and the University of Lagos, which is more prestigious and which would require more courage to rename?

Jonathan said, “Recalled that former President Jonathan took several other courageous decisions during his Presidency, including firing two ministers when questions of impropriety were raised against them.

“There have been a number of serious and proven cases of impropriety involving Muhammadu Buhari’s ministers, including two incidents of clearly established cases of certificate forgery. Did Mr Buhari have the courage to move against them?”

However, the PDP in its reaction, said it was a national tragedy that Nigeria’s Democracy Day was celebrated under the Buhari-led APC government.

The PDP National Publicity Secretary, Mr Kola Ologbondiyan, in a statement also insisted that the Buhari Presidency and the APC should not have celebrated Democracy Day when they were still overburdened by the guilt of their questionable presidential electoral victory.

“It is sad that on a day like this, Mr President dwelt on false performance claims and had no soothing word for millions of compatriots that have been subjected to the worst form of economic misery that they are now resorting to suicide and slavery mission abroad.”

The PDP spokesman also said the speech had no words of hope for the victims of escalated insurgency, kidnapping, banditry and bloodletting in the country.

He said, “How can this administration superintend over a Democracy Day celebration when it has questions of constitutional violations, electoral manipulations, media clampdown, victimisation of opposition, emasculation of free speech, brutalisation, arbitrary arrests and illegal detention, as already detailed in various reports, including those by the United States Department of State?”

Ologbondiyan stated that it was disheartening that the same electoral manipulation, violations and injustices for which the icon of June 12 Democracy Day, Chief Moshood Abiola died, had allegedly brazenly taken the centre stage under the APC misrule.

Also its presidential candidate said it was not enough to declare June 12, Democracy Day.

Atiku, in a statement, said, “Suffice it to state that the idea of June 12 is not merely to declare it as a Democracy Day – much as celebratory and commendable it might seem, the idea behind the event of June 12, 1993 embodies something much more bigger than that.

“It was a threshold moment in our national life that demands of us, as democrats, to embark on soul-searching and ask the salient question of all time: how better off are Nigerians?

“It is not enough to declare June 12 a Democracy Day when the government of the day is disrespectful of the rule of law and wantonly disregards court orders on issues that border on fundamental human rights.

“It is not enough to declare June 12 a work-free day when a disproportionate number of citizens are not sure of where their next meal will come from and when the sanctity of their lives is not guaranteed.

“It is not enough to declare June 12 a work-free day when freedom of the press, and of speech, fundamentals of democracy is being assailed.

“As a compatriot who stood shoulder to shoulder with the icon of the June 12 struggle, the Chief Moshood Abiola of blessed memory, I know first-hand that the choice of ‘hope’ as his campaign slogan wasn’t merely a populist tokenism.”

He stated that Abiola did not mean to deceive Nigerians with a hope he could not deliver.

Atiku said, “It is therefore not acceptable that an administration which had an opportunity of four years to deliver the promise of change to Nigerians, not only reneged on that promise, but propelled the country into a near-comatose state will lay claims to being a true friend of the June 12 struggle.

“To be a lover of June 12 is to believe in the common good of the people. June 12 is about the political leadership having the focus to retool the Nigerian economy. It is about having the skills to create wealth and jobs for the teeming mass of unemployed Nigerians. It is not about the inclination for shared pains; it is about shared prosperity.”