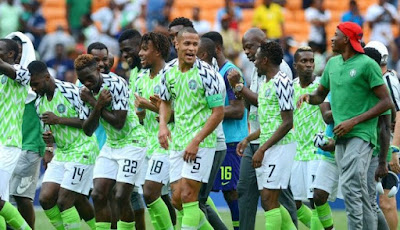 Nigeria will begin their journey at the 2019 Africa Cup of Nations with their opening match against Burundi at the Alexandria Stadium in Egypt on Saturday (today).

The three-time African champions, who are returning to the competition after missing the previous two editions, will be hoping for a winning start against the debutants, who were unbeaten in the qualifiers.

Nigeria finished top of their AFCON qualifying group, which had South Africa, Libya and Seychelles with a game to spare, while Burundi came second behind Mali in Group C of the qualifiers.

Eagles’ striker, Odion Ighalo, who is expected to lead his team’s attack at the tournament, finished the qualifiers as top scorer with seven goals.


Before the AFCON game, Nigeria had only played the Itamba of Burundi once, beating them 2-0 at the MKO Abiola Stadium, January 23, 1999, in a qualifying game for the 2000 AFCON.

While Nigeria boast many stars playing across various leagues in Europe and Asia, Burundi’s biggest star is Saido Berahino, who plays for Stoke City, same club as Eagles’ Oghenekaro Etebo in the English Championship.

This year’s AFCON is the 18th time the Nigerian side will be appearing in the African football showpiece.

The team will be presenting 20 debutants at the football showpiece, with the trio of captain Mikel Obi, Ahmed Musa, and Kenneth Omeruo the only ones to have been at any other AFCON.

While many have seen the encounter as an easy ride for the Nigerian side, Eagles coach, Gernot Rohr, believes it is their toughest tie.

“We prepare to face them with humility because they were unbeaten in the qualifiers. It’s difficult because all the big countries are here, but I believe the competition will be wonderful with passionate fans and nice pitches,” he said on Friday.

In terms of match day selection, Rohr seems to have made up his mind on players to use, with his preferred central defence pairing of Leon Balogun and William Troost-Ekong set to start.