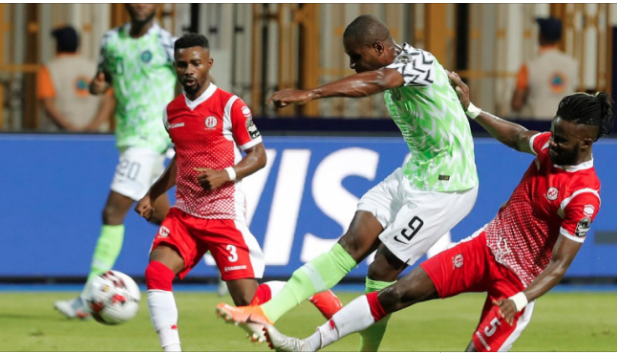 The Cranes of Uganda pulled off the first surprise of the AFCON tournament, defeating the Leopards of Democratic Republic of Congo 2-0 at the Cairo International stadium on Saturday to lead Group A ahead of hosts, Egypt.

The win was the East African country’s first since 1978 AFCON tournament held in Ghana, where they defeated the Super Eagles (then Green Eagles) of Nigeria 2-1 in the semi finals, before succumbing to host, Ghana.

The Gorica FC player found the head of Patrick Kaddu in the 14th minute from a corner kick. The striker timed his run to perfection at the near post to hand Uganda the lead. Three minutes from half-time, the lead was doubled through strike partner, Emmanuel Okwi. The Simba FC striker’s glancing header from Miya’s free kick delivery sealed an unlikely victory.


Uganda would look to seal qualification in their next game against Zimbabwe, while Congo DR will fight for their lives against the Pharaohs of Egypt.

In Group B, Odion Ighalo’s 77th minute goal helped the Super Eagles of Nigeria overcome a stubborn and impressive Burundi. The Swallows, in their first ever AFCON appearance, were denied the lead on two occasions by Eagles’ shaky goalkeeper, Daniel Akpeyi, who twice saved brilliantly.

The Burundians will next play fellow debutants, Madagascar, who were held from causing another upset against Guinea — the match ending in an entertaining 2-2 draw.

Star-studded Syli nationale of Guinea took a 34th minute lead through striker, Sory Kaba, who rounded the goalkeeper before dispatching into an empty net.

The Barea of Madagascar, however, kept on pushing against their more experienced opponents and got a just reward with two goals in six, early, second half minutes. Aniset Adrianantenaina headed in Madagascar’s first ever AFCON goal in the 49th minute, and Charles Adriamahitsinoro’s shot found the bottom corner to hand the 108-ranked island nation a surprise lead on 55 minutes.

The West African nation would equalize 11 minutes later through Francois Kamano’s penalty kick awarded for a poorly-timed tackle. Guinea pressed for a winner but had to settle for a draw which earned Madagascar their first ever AFCON point. Nigeria and Guinea meet in the next round of Group B games on Wednesday.