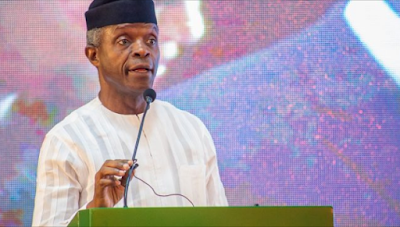 No fewer than 260 aggrieved members of the All Progressives Congress (APC) in Ondo State have urged Vice President Yemi Osinbajo (SAN) to accommodate them in the ruling party.

The APC members said they obtained nomination forms to contest for the House of Representatives and the House of Assembly primary but the party did not give them opportunity.

They had late last year approached the Federal High Court in Akure challenging the party for failure to conduct the party primary elections of 2018 /19 election year.

The crisis was almost consuming the party as key leaders spread across the state felt disenchanted with the non-conduct of the primary elections in the state.


However, early this year, a reconciliatory committee was set up by the national body of APC comprising the then governors of Borno, Lagos, Kaduna and DG-NIMASA, former Deputy Governor of Ekiti Prof. Mrs Adelabu, and the Secretary (woman) from Kano State.

They reportedly met with the Ondo APC aggrieved Aspirants at the Ekiti State Governor’s office where recommendations were made.

But the group in a letter on Tuesday sent to the Vice President and signed by the former Speaker of the Ondo State Assembly, Kenneth Olawale, said up till now, the recommendation had not seen the light of the day.

The letter added, “Subsequently, a meeting was held in Akure chaired by His Excellency, the vice – president of Nigeria, Prof. Yemi Osinbanjo (SAN) and attended by other National leaders of the Party with the aggrieved aspirants that went to court, where it was agreed upon, that the pre-election suit pending in the Federal High Court be withdrawn.

“We were expecting the team led by the vice president to fulfill its part of the agreement which included but not limited to compensations in lieu of costs incurred by these aspirants in the buildup to the primary elections that was never allowed to take place in the State.

”However, we were surprised that the leadership of the party has not deemed it fit to allow further communications between us since we fulfilled our own part of the agreement in spite of several letters we wrote to the appropriate authorities”.

The group pleaded with Prof. Yemi Osinbanjo and his team to promptly take appropriate action in the interest of the party, stressing that the same disruptive pattern was already playing out in Imo, Rivers, Osun and Zamfara States.

”We beg you to please honour the understanding, we sought from the aggrieved aspirants in Ondo State since the case in court is withdrawn, the presidency has the capacity to accommodate all 260 aggrieved APC aspirants from Ondo State,” they added.