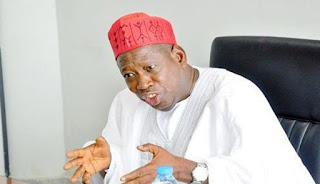 The Kano State government yesterday declared that it did not receive any court order restraining Governor Abdullahi Ganduje from issuing letters of appointment to the new first class Emirs of Rano, Karaye, Gaya and Bichi.

The government, in a reaction to media reports that a State High Court sitting at Ungogo on Friday granted an order staying action on the appointment of the new traditional rulers said letters of appointment were served them before the court’s decision.

The Chief Press Secretary to the governor, Malam Abba Auwal, said in Kano that “letters of the Notification of Appointment were written from the office of the Secretary to the State Government, Alhaji Usman Alhaji, since Thursday 9th May 2019 and were dispatched to the concerned Emirs the following day Friday 10th May 2019, in the very early hours of the day.”

He spoke even as the new emirs were formally installed at the Indoor Sports Hall of Sani Abacha Stadium, Kano.

Ganduje, at the event, urged them to ensure the development of education, health, security and agriculture in their respective emirates.

The emirs’ letter of appointment SSG/REPA/5/A/86/T reads: “In accordance with the power conferred on the Governor by the Kano State Emirs (Appointment and Deposition) Amended Law 2019 (1440 AH) which provides the creation of more Emirates.

“I wish to convey the approval of His Excellency, the Executive Governor of Kano State, Dr Abdullahi Umar Ganduje for your appointment as First Class Emir of (Bichi) (Karaye) (Rano) (Gaya) Emirate.”

He described yesterday’s installation as a symbolic presentation of Notification of Appointment Letters.

He added:” But with the new development, the Emirs would only thank the Governor during the Stadium event, for appointing them and serving them with their appointment letters since Friday morning of 10th May 2019, through the office of the Secretary to the State Government.”

Governor Ganduje spoke in the same vein at the installation.

He said the new emirs received their appointment letters and the staff of office on Friday and their coronation gazette accordingly.

The new Emirates, according to him, adding: “The four newly appointed First Class traditional rulers requested for this occasion so that they can appreciate the Kano State government for this responsibility that has been given to them.”

Continuing, he said:” If you can recall, yesterday (Friday) in the morning, the Secretary to the State Government had already signed their letters of appointment and all of them acknowledged that they have received their letters.

“You can also recall that this new law has already been gazetted by the government printer. Therefore the new traditional rulers requested for this gathering so they can appreciate the Kano State government and the House of Assembly.”

Ganduje said the new Emirate council needed to be created to attract more development in Kano State, adding that, “the new Emirs must keep records of school children who are not in school. They must encourage their subjects to go to hospitals for treatment.

“They must have an interest in agriculture. They must encourage their subjects to go into farming. They should make agriculture priority and their cornerstone.”

Ganduje also directed all District Heads, Village Heads and Ulamas within the area of jurisdiction of the new Emirs to ensure that they pay homage to them today (Sunday).

In their separate remarks, the newly installed Emirs thanked Ganduje for the new assignment given to them and promised to work harmoniously with the Emir of Kano, His Highness, Muhammad Sanusi 11 who is presently the chairman of Kao State Council of Traditional Rulers, to ensure socio-economic development in the state.

They also appealed to Kano people to continue to support Governor Ganduje in his effort to bring about development to all the nooks and crannies of the state.