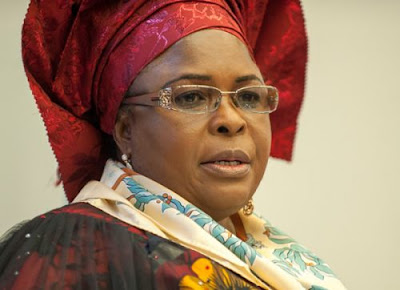 Former First Lady, Dame Patience Jonathan, yesterday urged the Federal High Court in Lagos for some time to respond to “weighty” allegations filed against her by the Economic and Financial Crimes Commission (EFCC).

Justice Mojisola Olatoregun, on April 26, 2017, ordered the temporary forfeiture of $5.7 million and N2,421,953,522.78 allegedly belonging to Mrs Jonathan. The judge made the order based on an ex-parte application by the EFCC.

The commission said the N2.4 billion was found in an Ecobank Nigeria Limited’s account number 2022000760 in the name of La Wari Furniture and Baths Limited.


The Court of Appeal, last January 12, upheld the temporary forfeiture. Dissatisfied, Mrs Jonathan headed to the Supreme Court, and the apex court, on March 15, affirmed the Court of Appeal judgment.

It directed the appellant to return to the High Court before Justice Olatoregun to show cause why the money should not be permanently forfeited to the Federal Government.

The Supreme Court also rejected her prayer to strike down the provisions of Section 17 of the Advance Fee Fraud Act, which EFCC relied on in securing the forfeiture.

One of them, he said, is a counter-affidavit to the motion on notice for final forfeiture; the other is a further affidavit.

Oyedepo said the EFCC filed and served its reply to the SAN’s motions on Tuesday.

Ozekhome said: “We got their affidavit at 5.5 p.m yesterday (Tuesday). A plethora of exhibits were attached. Their affidavit is replete with new facts.

“These are facts that are weighty, so weighty that they require us to respond. We don’t want any of their facts to be deemed admitted because we did not respond.

“I was served with a bulky document which has things that were not part of the original application.

“I’m only saying that in the interest of justice, we need to react to those issues raised.”

Adedipe said he had no objections to Ozekhome’s request for an adjournment.

Granting the adjournment, Justice Olatoregun said there must be an end to litigation.

“I hope parties realise that there must be an end to backward and forward filing of applications,” she said.

“Upon the opening of the account, several huge cash deposits in dollars were made into the account.”