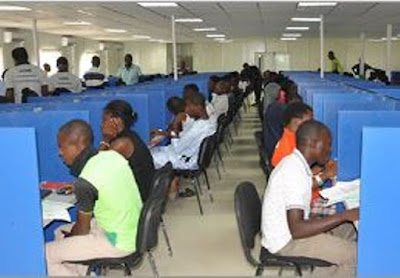 He said the board would give details of the results to reporters on the same day.

He said: “We had a meeting on Friday. And so, we are releasing our results tomorrow.”

Meanwhile, the board on Friday paraded one of its staff caught collecting N25, 000 from an admission seeker in 2018.

Adamu Martin, a jamb worker attached to the Information Technology Service, was said to have promised an unnamed candidate admission in 2018.

Oloyede said the board was conducting internal scrutiny of its staff, noting that any staff caught would be dealt with.

The registrar said: “He collected N25,000 for admission. So, we are not hiding anything. Even internally, we are doing scrutiny. Anybody caught will be dealt with according to the law.”

The culprit, Musa confessed to the crime, adding that he had refunded N10,000 to the admission seeker when the admission did not come through.

He said: “The person came to me for admission and I now told him that I knew people who would help. I collected N25,000 from him. But it did not work. So I now refunded N10,000.

“He was the one who reported to the registrar. The person I contacted to assist the admission seeker said they had already closed the admission. So I had refund part of the money.

“I apologise and I want JAMB to temper justice with mercy. This is the first candidate I collected money from.”

The co-suspect, Bakare Damilola, who paid Musa N25,000, for the admission said: “I am not the candidate. I was sent by the father of the candidate involved. So I came and explained everything to this man. I wrote the registration number down and I was asked to wait outside. Later, he told me, this thing would involve money.

“So the father of the girl, Mr Olaoye, who is based in Lagos State, sent the money to Musa’s account and I have the teller.

“Mr Olaoye was desperate for the admission of his daughter because she had stayed home for eight years. Eventually, the admission did not come through. We asked Musa to refund the money. He kept postponing and I reported him to the registrar.”