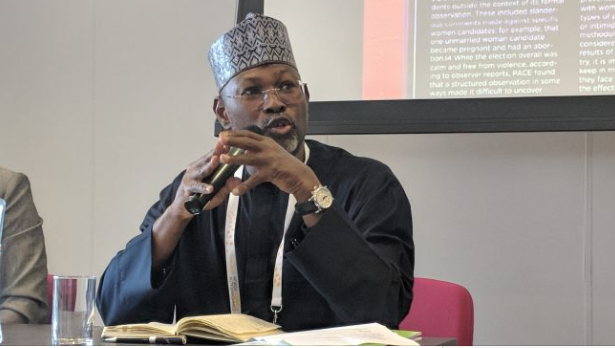 The Independent National Electoral Commission (INEC) has said that it would no longer tolerate any attempt by politicians to hold its officials hostage and force them to declare winners of elections under duress.

INEC Chairman, Prof. Mahmood Yakubu, gave the warning at the meeting of Inter-Agency Consultative Committee on Election Security (ICCES) ahead of Saturday’S elections, held at the commission’s headquarters on Thursday in Abuja, NAN reports.

He said that where such abduction occurs, the commission would not issue Certificates of Return.

Yakubu said that the commission was worried over the rate of attacks on its personnel and the loss of lives and election materials recorded during the Feb. 23 Presidential and National Assembly elections

“The Commission is concerned that many of our materials, including ballot boxes, voting cubicles, voters’ registers and Smart Card Readers were lost to acts of hooliganism and thuggery in the elections held two weeks ago.

“Most worrisome is the attack on electoral officials. Some of our staff were abducted and taken hostage in an attempt to disrupt elections or influence the outcome.

“In fact, some of the supplementary elections I referred to earlier were caused by such acts of thuggery.

“I am confident that working together with the security agencies, we will consolidate on the largely peaceful conduct of the Presidential and National Assembly elections while also taking decisive steps to deal with the minority of violators intent on disrupting the conduct of peaceful elections.

“However, the commission will not tolerate the act of holding our officials hostage and forcing them to declare winners under duress.

“Where such occurs, the Commission will not reward bad behaviour by issuing them Certificates of Return.’’

Yakubu expressed the Commission’s appreciation to the security agencies for securing the environment during the national elections.

He noted that in the course of securing the elections, the security agencies, electoral officials and innocent Nigerians suffered needless attacks resulting in casualties including deaths and loss of personal and official properties.

“On behalf of the Commission, I extend our deepest condolence to the families of those who lost their lives, including personnel of the security agencies. We are glad that the Police have made several arrests and investigation is ongoing.

“I wish to assure Nigerians that the Commission will work closely with the Police to ensure the diligent prosecution of all violators of our electoral laws.

“Citizens are asking for effective but non-intrusive protection before, during and immediately after the elections in which their rights are respected and their choices safeguarded.’’

Yakubu expressed optimism that the Saturday’s election would open by 8 am. going by arrangements already put in place by the commission.

“On Saturday March 9, Nigerians are once again going to the polls to elect Governors in 29 States, 991 members of Houses of Assembly in all the States of the Federation, 6 Chairmen as well as 62 Councillors for the Area Councils in the FCT.

“A total of 1,082 candidates will be elected by citizens across the country. Learning from the experience of the Presidential and National Assembly elections held two weeks ago, the Commission has effectively tackled the challenge of logistics.

“Materials for the election have been delivered to all States and the FCT. Movement to the Local Government Areas will be completed today.

“By Friday, all materials and relevant personnel will arrive at the Registration Area Centres (RACs). With this arrangement, we are confident that all polling units will open at 8.00 am nationwide.”

Yakubu disclosed that INEC had also reconfigured its Smart Card Readers for the elections on Saturday, saying the use of the card readers was mandatory and there will be no exemption to their deployment for accreditation of voters.

“Under our Regulations and Guidelines, there are clear penalties for the deliberate failure to deploy them on the part of our staff.

“Where such happens with the connivance of communities, the result of election in the polling unit(s) will be cancelled and zero vote recorded.’’