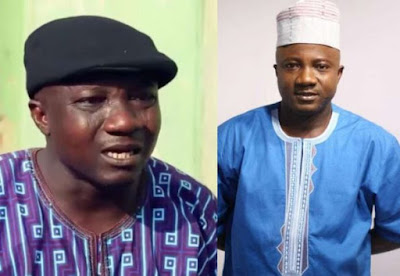 Actor, Olaniyi Afonja, popularly known as Sanyeri, speaks to Punch Newspaper about the challenges he encountered in his early days in the industry and other issues

When did you realise that you could act?

I was very funny as a young boy and I always made customers at my mother’s store laugh. Then, I met a friend who advised me to join him in the movie industry. He took me to his boss, the late Prince Oluseyi Adeoye, who trained me and that is how my career started. I have been in the industry since 1993.

Back then, acting was not regarded a lucrative job.


How did your parents react when you told them you wanted to become an actor?

In those days, it was normal for parents to be uneasy if their children said they wanted to become actors. They preferred professional jobs such as medicine, engineering and teaching. My parents were very angry with me and they really dealt with me. However, when they realised that I was adamant about my decision, they let me be.

Have you ever had any regrets choosing this career?

I don’t have regrets but I had numerous challenges, majorly lack of funds. I was so broke that I didn’t have money to buy clothes or do things that my mates were doing. I sometimes wondered if I wasn’t wasting my time. However, I thank God because I have been able to overcome all that.

When did you have a breakthrough in your career?

The movie that brought me to the limelight was Opa Kan, in which I acted alongside Odunlade Adekola.

Can you recall the first fee you were paid as an actor?

It is believed that Yoruba actors don’t earn good pay, compared to their counterparts in English movies. Do you agree with this?

As Yoruba actors, we help one another out by featuring in one another’s films (with little or no pay). Also, the kind of relationship you have with the producer of the movie determines the amount you would demand. However, in the English movie, it is strictly business.

Do you also act in English movies?

Yes, I do but I can’t remember some of their titles as movies are sometimes shot with working titles. The only ones I don’t act are Hausa and Igbo movies because I can’t speak the languages. However, if I have the opportunity to, I will do it.

What’s the highest fee you’ve ever been paid as an actor?

I haven’t collected my highest fee yet because if I say anything now, someone might see it and think otherwise.

Some people feel you are not versatile as you only play comedic roles. What do you have to say about this?

I do other movies too; not just comedy. But I prefer to act comedy movies because it makes people happy and laugh.

As an actor and producer, which do you consider more demanding?

Producing is more demanding because when I am acting, I don’t bother about anything else. However, when I am the producer of the movie, I will be very bothered about the welfare of the actors on set. If anything goes wrong, it may be disastrous and spoil the movie.

Have you ever been harassed by a fan?

That happens often. Some people think it is the same way I act in movies that I behave in real life. Sometimes, they would say I should dance for them. I recall an experience in Osogbo, Osun State, when an elderly woman removed her headtie and placed it on my head. She said they were ardent viewers of my films, and I had almost killed them with laughter.

What would you like the government to do to develop the industry?

I would like the Federal Government to encourage us by building a film village. This would help in facilitating movie production because we usually encounter problems when we go to shoot movies in people’s houses. I am not asking them to build the film village for free; they can rent it out to us. Also, they should make loans available to movie producers who have the capacity to pay back.

Some people believe that there are too many deaths in Nollywood. What is your take on this?

God has all our lives in His hands and He can do as He pleases. I can’t really blame our fans who say that because I also said the same before I got into the industry. People who are not entertainers die every day and life goes on. But because we are in the public glare, it seems like celebrities die frequently. There is nothing killing us in the industry. When the time comes for every one of us to meet our maker, we will all die.

How rampant is the menace of sex-for-roles in the industry?

There is no big deal about that because it is not new under the sun. A person’s upbringing will expose him or her eventually. If a person was born and raised properly, it will show everyone the kind of person he or she is. If a lady is decent, even if she is approached by a person who wants to sleep with her, she will not agree. But if the lady is promiscuous, she will gladly sleep with a producer to get a role.

It was once reported that you impregnated one of the young actresses you were working with. What’s the true story?

It is not a new thing for such rumours to fly. Almost all the popular actors have been rumoured to have impregnated one person or the other. I know my family members and the number of children I have.

You seem to be very close friends to Adekola Tijani and Odunlade Adekola, were you friends before joining the movie industry?

No. I met them in the industry and we have very good working relationships. However, I and Adekola Tijani trained under the same boss.

With your busy schedule, do you get to spend time with your family?

My wife knows that my job is very demanding. She knows that when it’s time to work, I do so with utmost concentration. Also, when I am at home with my family, I don’t go out. I spend quality time with them so they will enjoy my presence. I don’t go to the club; neither do I go to places that I am not invited to. If I am not working, I stay home, no matter how long.

How did you meet your wife?

I met her in 2004 when showing my movie at the National Theatre, Iganmu, Lagos, and it was during a Muslim festival. A lot of people came to the theatre to watch plays that day and my wife was one of them. However, she didn’t give me audience because she said I had tribal marks. When I asked for her number, she gave me her mother’s number. So, I kept on disturbing her mother with calls until she advised me to stop wasting my money on airtime because she felt that her daughter wasn’t interested. But when my wife came to the national theatre again to see a movie, I approached her and the rest is history.

Is your wife happy whenever you act like a dunce in movies?

Yes, she is. I don’t think she has got a better job for me. That is the job I do to take care of her and the family.

Which schools did you attend?

I didn’t really go to school.

Do you have the intention of going back to school?

Yes, I am already processing that. I am thinking of going to the University of Ibadan.

Why didn’t you go to school when you were younger?

I had little education when I was younger but I didn’t have the opportunity to go further. The little schooling I had is responsible for the ‘small’ English I speak now. However, when I go back to school, my English will become so sound that people will be scared.

When I am not on set, I don’t wear ankara prints because that is what I wear mostly in movies. I always like to have a different look in the real world because I don’t want people to harass me.