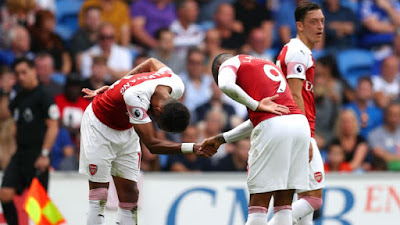 Arsenal completed a clean sweep of six English sides through to European quarter-finals by overturning a 3-1 first-leg deficit to beat Rennes 3-0 and progress to the Europa League last eight at the Emirates on Thursday.

Rennes had never before reached the last 16 of a major European competition and the scale of the tie for the French side was evidenced by the huge travelling support they enjoyed.


However, rather than be inspired, Julien Stephan’s side seemed intimidated by their surroundings early on to concede twice inside 15 minutes.

Arsenal quickly had the early goal they sought to get back in the tie as Aaron Ramsey’s low cross was swept home by Aubameyang.

The French-born Gabon international was also involved for Arsenal’s second 10 minutes later, although Rennes were right to feel aggrieved that the goal was allowed to stand.

Aubameyang appeared to be clearly offside from Ramsey’s pass with Arsenal’s Mesut Ozil even turning his back to the play expecting a flag.

However, it was not forthcoming and with VAR not in operation in the Europa League unlike the more lucrative Champions League, Maitland-Niles’s downward header from Aubameyang’s cross was allowed to stand.

Arsenal, though, then sat on their lead rather than building on it and could easily have paid for that approach after the break.

Petr Cech, in what could have been the Czech great’s last game before retiring at the end of the season had Arsenal not progressed, turned M’Baye Niang’s shot from outside the area onto the post.

Ismaila Sarr’s third goal for the hosts in the dying embers of the first leg looked to have swung the tie Rennes’ way and the Senegalese had the chance for a vital away goal, only for Sead Kolasinac to produce a saving last-ditch tackle.

Rennes were again unhappy with the Latvian officiating team when Lacazette escaped a second yellow card before the French international was replaced by Alex Iwobi.

With practically his first touch, Iwobi dragged a good chance to give Arsenal breathing space wide.

But 18 minutes from time they did have a cushion when having saved his side at one end, Kolasinac’s wonderful low cross left Aubameyang with a simple task to tap home his 22nd goal of the season and celebrated by pulling on a mask.

Aubameyang needed it back to hide his embarrassment soon after as he missed two glorious chances in the space of 60 seconds to seal his hat-trick.

But Arsenal held out to continue the Premier League’s resurgence and leave France without a single representative in the quarter-finals of either European competition.