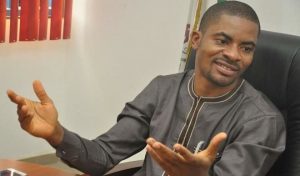 A Coalition of Civil Society Organizations, known as Concerned Civil Society Groups (CCSG), on Monday, stormed the premises of the American and United Kingdom Embassies in Abuja, protesting the continued detention of a Human Rights Activist, Deji Adeyanju.

The protesters said Adeyanju has been in detention in Kano for 52 days illegally, insisting all stakeholders should prevail on the All Progressives Congress (APC)-led government for his unconditional release.

The protesters, led by Coordinator of Coalition in Defence of Nigerian Democracy, Ariyo-Dare Atoye and Co-Convener, Free Nigeria Movement, Raphael Adebayo were carrying placards with different inscriptions such as “tyranny thrives when the majority are cowed”, “democracy under threat,” among others.

Addressing the groups and journalists, Atoye said Nigerian youths played key roles in the enthronement of President Muhammadu Buhari government and are committed to bringing the government down, following the alleged “new wave of tyranny, disregard for democratic institutions and the use of executive fiat to engage in illegalities without regard to the rule of law.”

He said: “Our fellow Comrade has been unlawfully detained in Central Kano Prison for the past 52 days with limited access to family and associates. And all efforts to recall the regime of the day from this blatant assault on human rights and free speech has proved abortive.

“The family and associates of our fellow Comrade fear that a plot may be in the offing to eliminate him as we have seen in recent times in Nigeria – of cases and instances where suspects died mysteriously in Police custody without any autopsy or forensic investigation carried out on their behalf.

“Fellow Comrades of Deji Adeyanju in the civil society fear that this is a conspiracy to not only take him to a location beyond our reach – since we all reside within Abuja – but to also execute a wicked plot to put him out of circulation indefinitely.”