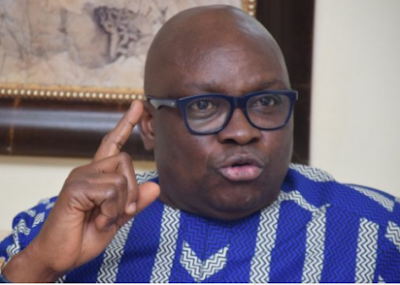 As the Independent National Electoral Commission, INEC, postponed elections for the presidential and National Assembly seats, the former Governor of Ekiti State, Ayodele Fayose has reacted.

Addressing a press conference on Saturday in Abuja, INEC, Chairman, Mahmood Yakubu said the presidential election was shifted to February 23 while the governorship was rescheduled for March 9.

Yakubu explained that the shift was due to problems of logistics.

Reacting, Fayose claimed the shift was because cabal in the presidency knew President Muhammadu Buhari will lose the election.

In a tweet, Fayose, however, warned that the cabal has succeeded in making their matter worse.

“Two days ago, I told Nigerians that the Presidency cabal were considering postponement of the elections because they knew that they can’t win.

“Now I’m vindicated. With this, they have only succeeded in making their situation worse. Nigerians will defeat this tyranny ultimately.”