Emery urges Arsenal to improve away form amid criticism 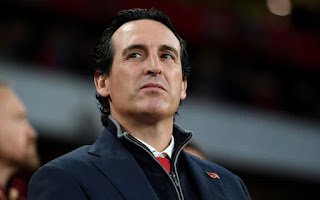 Unai Emery admits Arsenal have no excuse for failing to improve their wretched away record when they face lowly Huddersfield on Saturday .


Emery ’ s side have lost their past three away games in the Premier League including a 3 - 1 loss at Manchester City last weekend .


With defeats at Southampton and West Ham among the other low - lights of Arsenal’ s travel- sick season , the thought of losing to bottom - of - the -table Huddersfield at the John Smith ’ s Stadium is too much for Emery to stomach.


A 2 - 1 win at Bournemouth on November 25 was the last time Emery ’ s side took three points on the road , but Huddersfield looks the perfect opponents after losing 11 of their past 12 league games.


Asked on Thursday if a win this weekend was essential, Emery told reporters: “ Yes . We started very well away, changing our mentality , but now we need to recover this confidence , to recover this performance and the next opportunity is against Huddersfield .

“ For us as well, away games have been a challenge and each match is a new challenge .


“ Each match is also a very big opportunity for us to fight for the possibility to take three points and continue better than how we are doing in away games now. ”


While Arsenal will be fancied to take three points home from Yorkshire , Emery insisted his players should not take success for granted against a team fighting to avoid relegation.


“ These matches are difficult and they are playing for the possibility to continue in the Premier League , ” he said.


“ Their last results have not been good but with their new coach ( Jan Siewert ) , I am sure that they are going to play with big ambition and a big performance on Saturday.


Emery ’ s tactics were criticised by some Arsenal fans after the loss to City , underlining the mounting sense of frustration as the north Londoners slipped down to sixth place.


Some even called for Emery to be sacked less than a season after he replaced Arsene Wenger , but the former Paris Saint- Germain boss is unfazed .


“ My first critic is always myself . I work over the criticisms of me because I know that work in the present can change our way , ” he said .


“ How we are doing at home and away, we are with the possibility and the opportunity of (finishing in ) the top four . ”