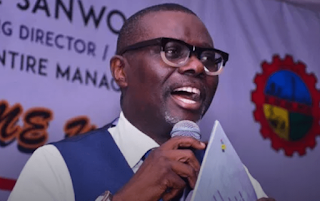 Governorship candidate of the All Progressives Congress, APC, in Lagos State, Babajide Sanwo-Olu has said if elected, he will not take instructions from any high authority in the state or group in leading Lagos.

Samwo-Olu made the assertion on Sunday, while speaking during the Platform’s governorship debate in response to a question by the Peoples Democratic Party (PDP) candidate Jimi Agbaje, who queried the ability of his APC rival to lead the state following his endorsement by Asiwaju Bola Tinubu.

He said, “I believe the question is to look at Lagosians and say I am going to be in charge, that the bulk is going to stop on his table.

“Mr Sanwo-Olu had had a unique opportunity of running the state budget; I am my own person despite endorsements.”

He further listed his achievements as a commissioner in Lagos, including the introduction of the Lekki Free Trade Zone.

Other projects Sanwo-Olu highlighted are the 767 – 112 control and command centre, security trust fund, as well as the first pension board in the country.

Sanwo-Olu added, “I clearly know that what is on the ballot is a four-year tenure and I am not going to say that I am interested in an eight-year.

“If all of those promises that I have put here today I do not fulfill them for one reason or the other, I don’t think I will deserve to come back again.

“We are going to ensure that we create an environment where all innovative ideas will come into fruition very quickly,” Sanwo-Olu pledged.

“As we speak, I have deployed free Wi-Fi in 18 locations in Lagos, including all the higher institutions in Lagos and they are working. It proves to show that I’m not just saying it, I am doing it.”

The governorship candidate stressed that he was the right man to succeed Governor Akinwunmi Ambode years with 13 and 17 years of experience in the public and private sectors respectively.

Asked about how transparent his government would be following support of APC big-wits in the state, Sanwo-Olu said, “When I was in government, we do a quarterly budget review in which we become answerable, we become accountable and we see all of the numbers that come out from our budget estimate on a quarterly basis.

“Beyond that in my government is to set up a citizen engagement portal where all issues of concern will be popped out and we can escalate it to the governor’s office and (they) will get responses that will come directly to them.”