‘NBC will ban it next week’ — how Nigerians received Falz’s ‘Talk’ video that takes a swipe at Buhari's government, Nigeria Senators, MURIC... 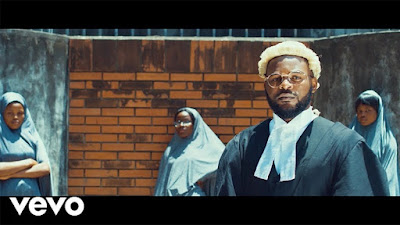 Folarin Falana, Nigerian rapper popularly known as ‘Falz’, on Friday, released the video of his new single ‘Talk’ and it has sparked a flurry of reactions from fans.

The single is expected to be on his upcoming album ‘Moral Instruction’ which will be released on January 15.

'Talk' is a socio-conscious record that addresses critical happenings and advises the youths to be wary of greedy politicians. The video themed in a video game format sees Falz driving around town alongside his guys while different scenes relating to the lyrics play out.

The song addresses subjects like politics, religion, cybercrime, NYSC wage and the MURIC lawsuit saga.
Fans took to the social media platform to air their opinions on the video.

Here some of their tweets:

Protect Falz at all costs. That man is single handedly using his music to fight for Nigerians & highlight the societal issues that are being faced by millions of Nigerians but your other MCMs will be using blood money & fraud in their lyrics & disguise them as “awareness”.#Talk
— 👑 DaddyMO 👑 🚀♠️ (@officialdaddymo) January 11, 2019

"4 Years Tenure 3 Years Holiday" Falz with a strong shade towards Buhari. In a Time where some of his mates are telling us to do Blood he is telling us the reality of a Failed President. What a Man 👑#Talk
— KinG NomSo👑 (@ani_nomso) January 11, 2019

Falz don break all the table in this country with his latest video. They will soon ban the video😂😂😂
— Ogochukwu ❤️ (@_emmalez) January 11, 2019

Falz scored a Hat Trick with this new video

"We buy your story, but you no give us CHANGE"⚽️

"The yawa wey we see, no be the security wey you promise" ⚽️

Let's be honest, Falz is the Fela/Idris Abdulkarim of our time.

He even ended with "Na me talk am oo"
Like weytin una wan do??😂
Let's see what brother Muric will do this time around 😂
Falz is a treasure jare 🔥 shaking tables without fear 🔥 #Talk
— Di'ra (@AnayoAnn) January 11, 2019

#Falz #Talk just
dragged Muric 😂
dragged Buhari.😂
dragged your favourite pastors😂
.
If there's any artist challenging authority as Fela did, then its Falz.
.
No be to dey smoke weed and dey raise hands up go make you next Fela. pic.twitter.com/PPMk1TwT8f
— The Kingmaker🦅 (@SmithVinci) January 11, 2019

#Talk by Falz is another woke song.

The Fact that Falz can shake tables with fear is just amazing.

Thank God we have people that can speak the truth!!👌
— Justin Ifeanyi |🇳🇬 (@Eastcoastprince) January 11, 2019

Get your self a lawyer like FALz, Fela of our time

Falz is the Fela of our Generation. #Talk

He has continued to address the ills of our government in his lyrics & has also continued to call out those involved without fear.
A True Music Icon..

Falz was definitely the guy in boarding house that was confident in misbehaving knowing his School father is the Senior Prefect and can't be touched lol... This guy has just been shaking government tables since 😭
NO BE ME #Talk AM O!
— UGLIEST FINE DADDY †🕊 (@skizyman) January 11, 2019

Olamide and Lil Kesh be like:falz how, how,. How do you create sensible songs ...how? pic.twitter.com/mKW17lCHTB
— Babalaje of OAU (@HardeoyeRanking) January 11, 2019