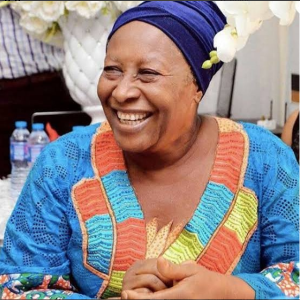 Veteran actress, Patience Ozokwor, aka Mama G, is unarguably one of the best that the silver screen has seen in recent times. She speaks with Punch Newspapers on her career, marriage and other issues

You were involved in radio drama at a point in your career. How does that differ from other forms of drama?

That was the in-thing at that time. One doesn’t know anything beyond what is happening around and presented to one. They were all instruments that God used to help me. If you’re able to do anything on radio, it would be easier for you to perform on television because on radio, you have to project everything that is needed as regards emotion. If you are angry, it is through your voice that people would know that. And if you are happy, it is through your voice that people would know as well because they can’t see you. If you can act on radio where nobody is seeing you, then, it would be easier for you to excel on TV. The body movements on TV help you to pass your message across because the viewers can easily see the emotions in your demeanour. It is usually good to start from radio so that it will help you build your delivery and other elements necessary for you to succeed as an actor.

You were also part of a NTA drama titled, Someone Cares. In what ways did that experience impact on your career?

That was my first TV drama. I am not a nervous person; so, I wasn’t jittery when I was on set. I already killed nervousness when I was doing stage plays. I started featuring in stage productions when I was in secondary school. Some of the plays I did then were The gods are not to blame and The Marriage of Anansewa, among others. Whenever we had competitions of arts and culture, my school always came out tops because we had a very good English Language teacher. Back then, we were honoured with little gifts such as plastic buckets, which were not so common then.

Meanwhile, by the time I took part in the NTA drama, I was a staff member of Radio Nigeria, as a broadcaster and announcer. So, I already knew the rudiments of the profession.

I didn’t even see it as doing something special. I was just doing what I was supposed to do and it came out fine.

You have a rich acting background having traversed various areas of the profession. At what point did you first know that you wanted to become an actress?

I never knew that there was anything like stardom. On radio, I was just acting a role and people didn’t even know my face. At that time, I just did what I thought I was enjoying without knowing where I was going. I wasn’t doing it with the hope of becoming a star. Does that make sense to you?

The young ones now will tell you to make them stars. Back then, we didn’t know that; we were just doing what we enjoyed.

Can you recall some of the first movies you acted in?

There was an epic movie we shot back then titled, Sins of the Father. That was the first movie I acted in before God took me to other productions in Enugu. I started working in Enugu and I am still based there. It wasn’t a major role and the character I played died in the process of child bearing. It wasn’t a big role but it was significant to the plot of the story.

When did you have your breakthrough in Nollywood?

It was not quite long ago. It was in the movie where I played the character called Authority and that’s when people started calling me by that name. It was then that people saw that I was actually coming from somewhere and heading somewhere. A role that I played in a movie titled, Odum, was what convinced people that I was a versatile actress. Other movies such as Amina also stood out.

I recall that someone suggested to me to play the role of Authority. The scriptwriter, Neville Ossai, initially wanted his lecturer to play the role. During the audition, we had a break and he saw me. He then insisted that he wanted me to play the part. After my first audition, they called me out again and asked me to act the role with another person. I wondered why that was so. Immediately after my second audition, Neville directed them to put down my name. After that, he went out to cry because he had promised to cast his lecturer for that particular role.

When Authority was released, it became an instant blockbuster.

Do you sometimes regret acting ‘wicked’ roles in movies?

Any actor worth his salt should be able to deliver on whatever role he or she is given to play. For people to be so affected by the roles I have played means that I did a good job in interpreting the characters I was given.

However, I wouldn’t like to pass wrong messages to anyone through my movies.

Don’t you feel stereotyped at times?

If you study my career, you will realise that I have played a lot of roles over the years. However, the ones where I act as a strict or vocal person are the ones that have been more popular. I guess that’s what people like.

However, I always strive to strike a balance and I don’t act just one type of role.

Some people feel you are able to act as a wicked mother-in-law so well because you are one in real life. Is that really so?

Nothing can be farther from the truth. I am a simple person who doesn’t like to interfere in other people’s lives.

Sometimes, I cry when I watch some of the movies I acted in. I am nothing like that and you can never see me where wicked acts are being perpetuated. If anybody close to me does something wrong, I will not shield the person. Like I have said several times, I am an actress and every character I have ever played ended on the set.

You got married at a young age. In what ways did that experience impact on your growth as a person?

I believe firmly that everything that happens to a person is ordained by God. You may not understand why you’re going through certain situations but as you grow older, you will recognise the hand of God in your life.

Truly, I got married at a young age due to the bidding of my parents. At that age, marriage wasn’t what was on my mind but I had to go into it to make my parents happy. It was a combination of good and bad times but I thank God because that experience really built me as a person and taught me a lot. It made me more mature. As a young girl going into marriage, I didn’t have it rosy at that point because I didn’t understand many things. At the time I got married to my husband, I had a lot of suitors vying for my hands in marriage but I had to go with my parents’ choice.

However, my late husband was a good man and he took care of his family.

Why do you think your parents made that choice for you?

The question would be best answered by them.

Your late husband was sick for sometime before he passed. How did you cope then?

It wasn’t really a palatable experience and I don’t like to recollect it. However, God was able to get us through. Living with someone who is ill could be very challenging because you have to do many things on your own. At times, it could be frustrating but one would keep hoping that the sick person gets better. When he finally died, I felt very bitter but I could not question God. Recall that I was also quite young at the time.

After you got born again, you changed your style of dressing and advocated same for others. Considering that people have criticised you for that, how do you feel?

I did not advocate anything for anybody. We all have our lives to live and we have different relationships with God. That I decide to dress in a particular way doesn’t mean everybody else has to do the same. The important thing is to be decent at all times.

What advice do you have for aspiring actors?

Many of them, these days, are only in it for the fame and fortune; and that’s not good enough. If you go into acting with the intention of becoming wealthy and famous instantly, you would be highly disappointed. You have to love the craft and put in your best at all times. Continually improve on your talent and never settle for less.

What will Nigerians find surprising to know about you?

I am very soft-hearted and I cry easily. However, I believe in facing whatever is at hand squarely and doing a good job. Even if I will cry later, I could do that in my closet.

I dress simply and comfortably.