Why sacked SGF, Babachir Lawal was in Aso Rock 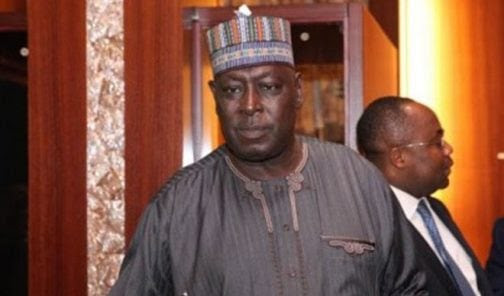 Former Secretary to the Government of the Federation (SGF), Engr. Babachir Lawal, was on Wednesday night seen at Aso Rock, Abuja.

Lawal was seen with Governor of Ogun State, Ibikunle Amosun amongst others at an event, tagged ‘Together Nigeria’, held at the Presidential Villa, Abuja and organised by the Wife of the President, Mrs. Aisha Buhari, jointly with the Buhari Support Organisation (BSO).

This is the first time he would be seen in the Presidential Villa, since his sack. President Muhammadu Buhari was among personalities who graced the event.

The ex-SGF was said to have visited Aso stock in support for the launch of the campaign group for the re-election of President Muhammadu Buhari in the 2019 general election.

Recall that Buhari had in October 30, 2017, sacked Lawal following the report of a three-man Panel led by Vice President, Yemi Osinbajo, that investigated him over alleged irregularities in Presidential Initiative on North-East (PINE) activities.

But the Ex-SGF, who is still being investigated by the EFCC, had insisted that nothing will affect his relationship with the president.

“If the President were to be my brother, does it mean we cease to be brothers because I am being investigated by the EFCC? A relationship breaks because of a false accusation against an innocent man?” Lawal said.

During the event, President Buhari promised that party men and women who work hard for the victory of the All Progressives Congress (APC) in the 2019 general elections will be rewarded adequately.

He regretted that not all those that worked for the party in 2015 were rewarded, but assured that more rewards will come in 2019.

The President said: “Tonight’s event, once again, reminds me of our political struggles over the years and the support I enjoyed from many support structures such as The Buhari Organisation (TBO) and Buhari Support Organisation (BSO).

“ I am happy that today, we are not only celebrating our election victory, but our numerous landmark achievements.

“I have listened and I acknowledge with delight the story of BSO past, present and future from previous speakers.

“To all those who contributed to our successes in one way or the other, some of you are feeling disappointed because… I assure you this time around hard work and loyalty would be rewarded adequately”, he said