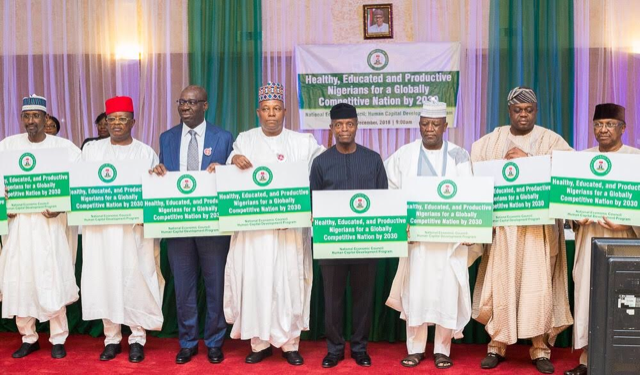 Mr Osinbajo said “now is the time to get the job done.”

He made the call on Friday at an extended meeting of the National Economic Council (NEC) at the State House Conference Centre, Abuja.

The meeting focused on the Human Capital Development plan of the APC administration, which is hinged on three main thematic areas; health and nutrition, education and labour force participation.

“As a government, we are fully aware of the issues and we are committed to transforming them. There is no denying that debilitating levels of poverty existed in spite of huge earnings in the past.

”We are doing exactly what countries like India and Brazil did in similar situations,, for instance, kickstarting the Social Investment Programme (SIP).

“Since the meeting in March, we have made significant progress, adding more than two million people to the programme, feeding over nine million school children everyday et al. We must ensure that what we are investing in must produce tangible results.

“The federal government must together with states collaborate on issue of human capital development, it should not be a platform for blame games. Concerted collaboration is required now so we don’t repeat the mistakes of the past. Constant communication with the people is equally important because the resources belong to them, ” he said.

The vice president also spoke on the need to promote transparency, accountability and improve existing data.

He said all the governors remain accountable to the people, adding “we have tried to make sure that every cent is well spent.”

According to him, the concerns raised on the human capital development can only be addressed with the availability of funds.

”I can assure you that the governors are committed but we have to work harder in the area of revenue generation to address all these competing demands,” he said.

Mr Yari queried the fact that Value Added Tax (VAT) has remained stagnant at five percent for the past 25 years, insisting that a political decision has to be taken to increase it in the new year.

The World Bank Nigeria Country Director, Rachid Benmessaoud, who also spoke on human capital development, said for the world to do well, Nigeria has to do well because the world relies on Nigeria’s human capital.

He said the quality of education improves young person’s opportunity to earn a living and help the economy, urging the government to work on improving human capital development.

The Country Director of UK’s Department For International Development (DFID), Debbie Palmer, said Nigeria is ranked near the bottom of the World Bank’s Human Capital Index (152 out of 157 countries), describing it as a rude wake up call for everyone in the country and for everyone who cares about Nigeria.

“Nigeria will be the third largest nation in the world by 2050, we need well-nourished, healthy, educated and skilled people who can go out and get jobs.

“The projected population growth could be a big boost to Nigeria’s economic fortunes with more people of working age driving economic progress. But for this to happen, we urgently need increased investment in service delivery to avoid an undernourished, unhealthy and unemployed nation, ” she said.

On his part said, the Country Director of the United States Agency For International Development, USAID, said the U.S government will continue to honour partnerships in the areas of education and health as well as with the private sector.

Also, the managing director and CEO of Dangote Foundation, Zouera Youssoufou, commended the government for its commitment to see to improvement in human capital development.

Those in attendance at the NEC extended meeting were governors of all the states of the federation or their representatives, Governor of the Central Bank of Nigeria and development partners among others.