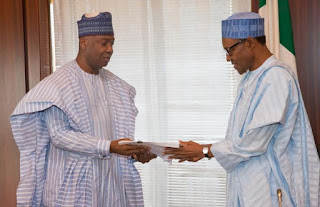 President of the Senate, Bukola Saraki, has advised President Muhammadu Buhari to give assent to the 2018 Electoral Act Amendment Bill passed by the National Assembly.

Saraki, in a statement by his Special Adviser on Media and Publicity, Yusuph Olaniyonu, in Ilorin, the Kwara State capital, on Wednesday, urged the President to rise above “petty politics and act without further delay in the best interest of the country and its democracy by signing the bill into law.”

The Senate President noted said he had been inundated with telephone calls and discussions by members of the National Assembly, who expressed concern over the delay in assenting to the bill as the one-month period provided by the law for a bill passed by the National Assembly to be assented to, is about to expire.

Saraki said, “The entire country and the international community are aware that all the concerns raised by the President on the past three occasions he withheld assent to the bill have been addressed by the legislature… The President should know that the survival of democracy, its development and the future of Nigeria are far more important than the ambition of any individual or party. I am using this opportunity to call on President Muhammadu Buhari to put a stop to this uncertainty in the political process by signing without delay the 2018 Electoral Bill.”