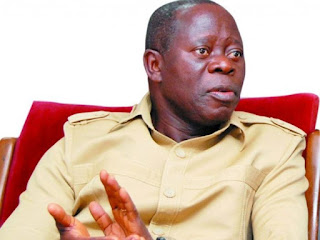 The APC chair attacked the former president for backing his former deputy, Atiku Abubakar, for president after telling the world that God will not forgive him if he did that.

Obasanjo reversed himself after Catholic Bishop of Sokoto Diocese Matthew Hassan Kukah and other clerics reconciled the leaders.

Oshiomhole, who spoke while receiving APC women leaders from Edo State and the Federal Capital Territory (FCT), lashed out at the former President, saying he was inviting God’s anger by backing Atiku.

The APC chief faulted also the decision of Governors Rochas Okorocha (Imo) and Ibikunle Amosun (Ogun) for encouraging their supporters to pursue their political ambitions in other parties after losing out in the APC primaries.

Both governors have promised to support President Muhammadu Buhari’s re-election bid but that they would stop at nothing to ensure the victories of their choice candidates in other parties.

Oshiomhole said yesterday that both governors were behaving like poor students of their own history, adding that Okorocha and Amosun had forgotten they lost elections before winning on the APC platform.

Oshiomhole was, however, confident that the APC remains stronger in Imo and Ogun states, despite the grievances of their governors as a result of the outcome of the party’s primaries where their preferred candidates lost.

He said: “The real headline today is that we will win in Ogun State and we will deliver Hope Uzodinma in Imo State. Our popularity in Imo today is increasing. What we don’t know and Nigerians always make this mistake that once you are a governor, you have electoral value.

“Yes, we have overwhelming majority of APC governors who have electoral values and we also have some few electoral liabilities. I can tell that in Imo State today we will have more votes.

“Those who think our political future is tied to them; they are poor students of their own political history. Some of these people who talk as if they are invincible, they have forgotten that they have run elections in the past and lost until they abandoned their parties and joined us. So if they return back, history will repeat itself.

“But artisans, traders, teachers and workers whose salaries are not being paid have the same weight of vote and they are excited about the renewed possibility of a new government coming with fresh ideas free of all the encumbrances of the present system. So, in Imo I’m very confident.

“Vice President Yemi Osinbajo is from Ogun State. The state is one of the most enlightened states in Nigeria. They have a huge history; they are not in a political kingdom headed by one person.

“If they were looking for true reconciliation, they wouldn’t have done what they did (defection of aides). That is not how democracy works. Nigeria must grow beyond this syndrome – ‘I’m the governor, I will decide.’ You have only one vote. With due respect, I was once a governor. Overall, APC is much stronger now.”

On Obasanjo’s decision to back Atiku, Oshiohmole said the former president should remember he swore that God should punish him if he ever support his former vice to become the president.

He said: “We know there are people across the divide who are fighting back. There is a gang up by those who are used to sucking the system without adding any value but Nigerians will not allow that.”

According to him, next year’s elections will be a smooth sail for President Muhammadu Buhari and the APC because the ethnic and religious sentiments that characterised the 2015 election lost by former President Goodluck Jonathan had become irrelevant.

He said: “The two candidates are from the North and they are both Muslims. People are now going to look at character. Nobody has ever said Buhari is a thief. But who said the other person is a thief? It was his boss.

“When you are working with me and I said you are a thief, God will punish me if I support you. And when you are confused because your supply line has been chopped off, you now turn around to support the same person.

“That God that you called with your name to punish you if you support the person is about to go to work. And He will go to work in February and He will punish him thoroughly and the person he is supporting, in favour of Nigeria.”

Speaking further on Buhari’s chances in 2019, Oshiomhole said: “My hope is that Buhari will win. He will have more votes than he got before because some of those who misused religion; for that was the most potent weapon that was used very recklessly, by people who had no issues in 2015.

“This time around, they will have to speak to the issues because the two main candidates are Muslims. Again, the issue of North-South; Buhari maintained the key support in the North and that was because people voted on the basis of son of the soil. This time, the two main candidates are from the North so these things will not be there. We are now going to look at character.

“Who can’t say Buhari is a thief; nobody has ever said so. But who said the other person is a thief? it is the person he was working with.”

Turning to the women, Oshiomhole said: “Yes, the women are going to play a key role in the elections, they are going to compare notes. Those of them who were about 20 year’s old in 1999, by the time they were 36 years, they know all that has happened.

“Some people recently said that Atiku was one of the most powerful Vice Presidents Nigeria ever had, so he would not say that he didn’t know what was going on in government. So, he was a central player and you know all the issues of corruption in government then, especially the allegation that sums of money ranging from N50 million were being shared to National Assembly members for the third term, all coming from the system. So we can return to those eras of locusts.”