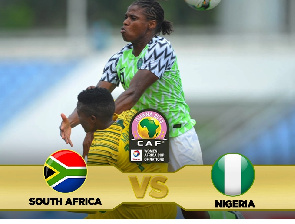 Hello, good afternoon and welcome to Nigerianeye's coverage of the closing ceremony and the grand finale of the 2018 Women’s AFCON staged in Ghana.

After two weeks of grueling and exciting football, South Africa’s Bayana Bayana and the Super Falcons of Nigeria go toe to toe to see who will be crowned Queens of African football.

The South African coach said with a good team and good planning, they will prove to be the banana peel that will cause the defending champions to slip in the tournament.


In their opening group B game, Nigeria dominated the South Africans, but couldn’t find the punch, until Thembi Kgatlana scored and put the game beyond the reach of the Falcons.

“We will work together as a team and plan again. And hope to execute the plan because that’s all it is about. We have never won the Women’s AFCON and we are going to give it a shot and see what happens,” said Ellis.


Nigeria will now head to France as African champions. What a wonderful evening of beautiful football. Thanks for joining our live coverge of the match!

As for Nigeria? Their golden generation marches on once more - and by the skin of their teeth again.

Nobody - not even their own fans - expected South Africa to make it this far. Their fairytale may come to an end at Accra Stadium - but what an adventure it has been.

Tochukwu Oluehi is the heroine as she saves the last kick of the game. All hail the Super Falcons, the queens of African football

- South Africa scores and Tochukwu Oluehi had no idea

- Ramalepe blasts it over the bar

- Nigeria will go first and Onome Ebi will be the woman to take, against Swart. She hits the woodwork

118' Makhabane forces a fine save from Tochukwu Oluehi, that was almost a goal but Banyana get a corner as a consolation

116' Rita Chikwelu commits a foul near the Super Falcons' goal area. She gets a caution and will Banyana make this count?

114' Nigeria haven't been at full-throttle in this game but they are currently set for a ninth Awcon title if things remain as they stand.

112' Chinanza Uchendu in for Francisca Ordega. Will Uchendu be the heroine for the Super Falcons? Eight minutes of football will decide

110' Ihezuo attacking move diluted by the South African defence line. The debutant has not really shown any spark in the game except for her miscalculated runs

108' Ordega and Chikwelu engage in a foot-race for the ball on the South African right-wing; the Super Falcons get a corner in the process

106' Here we go then; will Nigeria win a ninth trophy. Accra await a vital 15 minutes of football as Banyana look to hold on.

101' South Africa are playing with confidence right now, slipping through the cracks of Nigeria's backline all too easily.

99' Is there one more twist in this game or are we headed for penalties in the final?

97' Now Ihezuo is hobbling in midfield as Nigeria swarm forward again through Oshoala to no avail. Thembi Kgatlana goas inside Nigeria penalty area but fires into the waiting hands of Tochukwu Oluehi

95' Ihezuo looks to whip down the right wing on a counter-attack, relatively isolated from her teammates; Oshoala smashes towards goal and Banyana goalkeeper makes a smart save

93' The sides are playing in the directions they did in the first half, and Nigeria are making the earlier moves with intent. They press down the right wing before conceding a freekick with Ordega getting cautioned

91' We're underway in extra-time in Ghana, with Nigeria restarting. This is the first time in the history of the Africa Women Cup of Nations that the final will be heading for extra time

90' There will be three minutes of added time.

86' Oshoala’s unnecessary miss has put her team under pressure in the closing stages. The control Banyana once had in the second half is gone. They'll have to be resilient at the back to see this one out.

82' Ordega goes so close but misses target. Hardluck for the Super Falcons and it looks like the game is heading for extra-time

80' STAT: Out of the nine encounters played between both sides, the west Africans have won on seven occasions. The first was 2-0 victory in the final of the 2000 edition with Olaitan Yusuf and Stella Mbachu getting the goals

78' Though have lost the momentum they carried into the break, Nigeria not far from out of this despite missing their penalty kick. Ihezuo with that miss

76' No player on the pitch has deserved a goal more than the influential Ordega, who has been impressive this evening

74' MISS!! Oshoala misses from the penalty spot. That is a shame. Forget her treble against Zambia, the reigning Africa Women Player of the Year has had a woeful tournament

72' PENALTY: Francisca Ordega wins a penalty for Nigeria after she was brought down inside Banyana penalty area by goalkeeper Swart.

70' Referee Gladys Lengwe brings the game to a temporary halt as Mbane is down on the turf. The game is back and Nigeria try an attacking move

66' Smeda has walked out of the pitch. That looks like a hamstring injury.

64' Nigeria are putting South Africa under immense pressure at the back. Banyana Banyana are holding firm and have the pace of Thembi Kgatlana to ease the strain on the counter.

60' Chinwedu Ihezuo brought in for a rather tired Rasheedat Ajibade. Let’s see if Ihezuo’s Awcon debut will bring some luck upon Nigeria

56' Ordega raids down the right flank in the early stages, but his low cross is gathered and South Africa in control

54' Out of the total goals (19) scored in the meeting between both teams, 11 have come in the first half

50' The game has settled back into the same style we saw for the majority of the first period as South Africa dictate the tempo, while Nigeria sit back to soak the pressure.

46' Back underway in Accra , will the game be decided within 90 minutes or will extra time be needed? It's time to find out!


After a slow start, Nigeria have controlled the tempo of the game but have struggled to create clear-cut opportunities. Swart hasn't had too much to do and South Africa have found it fairly easy in defence
Nothing to separate the two sides in Accra following the first 45 minutes and the major talking points will be the fact that topscorer Thembi Kgatlana has not been given a breathing space to wreak havoc

45' ONE minute of added time to end the first half.

43' Almost a moment to savour for Mbane, who drives a fierce shot through the defence but cannot beat the Nigerian goalkeeper.

41' Thembi Kgatlana finds her way inside Nigeria backline but Onome Ebi's timely interference sees the ball go out of play. That was a good one from the Super Falcons skipper

39' Out of the nine encounters played between both sides, the west Africans have won on seven occasions. The first was 2-0 victory in the final of the 2000 edition with Olaitan Yusuf and Stella Mbachu getting the goals

37' Still goalless, still not really any clear-cut chances created by either side. Many predicted a high-scoring affair but it seems that this game could be decided by just a single moment of magic.

35' Ajibade again needing to intervene in defence as Smeda looks to thread a shot on target and it looked dangerous, providing further encouragement for Banyana

31' Since all that early South Africa pressure, it's been Nigeria controlling the tempo of the match. There's still not been too many chances created in the game though, with the majority of the play coming in the central part of the field. Corner-kick to Nigeria

29' BALL POSSESSION: Nigeria 46 % South Africa 64 % . Nigeria’s Ngozi Ebere gets the first yellow card of the day after a careless challenge on Motlhalo

27' South Africa win their second corner-kick, taken by Makhabane but cleared by Rasheedat Ajibade. Both sides after 27 minutes are still yet to find their bearing

25' A better period of possession for the Falcons, as they knock the ball around in midfield. Banyana are more than happy to allow that to happen though, as they drop back to block any room to potentially break into.

23' Ordega almost breaks away down the right flank as she collects Chikwelu’s offload. Swart reads the danger and was at alert to deny Ajibade from giving the Nigeria the lead. A vital save from the goalkeeper

21' Thembi Kgatlana and Asisat Oshoala are the two players who've dominated the discussions this week but we're yet to see much from either of the pair. Medics attending to Swart after clashing wit Ordega

19' MISS: Asisat Oshoala heads wide Ngozi Okobi’s corner-kick as the Super Falcons are gradually getting into the game in Accra

17' Dennerby’s side patient when they get the ball, whereas South Africa are looking to immediately hit to exploit any space. With full-backs flying forward for both sides, it could be the wide areas where the best opportunities are crafted.

15' Asisat Oshoala tries to beat Seoposenwe but it ends up with the Falcons winning a throw-in. Quickly taken as Nigeria mount a serious pressure on Banyana backline but that counts for nothing

13' Ngozi Okobi wins a goal kick for Nigeria after Oluehi had prevented the South Africans from taking the lead. She is up for a busy evening against these dominating Banyana

11' Chukwunonye makes an interception on the right flank and Seoposenwe surges at the Nigeria backline. Freekick to South Africa

9' Nigeria are struggling to cope with South Africa’s high press at the moment and Dennerby’s side cannot play their way out of the defence. It remains to be seen whether the South Africans can make their early pressure count.

7' A poor corner-kick taken by Makhabane and a failed attempt for the Banyana Banyana to take the lead. The Super Falcons look so organised at the rear so far

3' South Africa have the game's first threatening attack, as goalkeeper Tochukwu Oluehi has been forced to make three saves. Nigeria attack now and Oshoala’s shot is saved by Swart