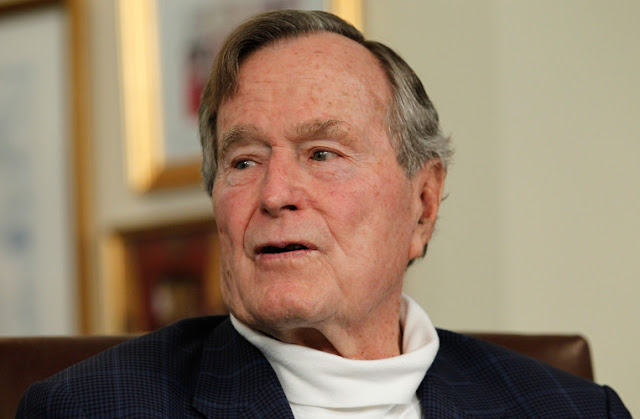 George  Herbert Walker Bush, the 41st president of the United States, is died. He was 94.

His death was announced by his family Friday night. The former president’s health had been in decline in recent months.

The former president’s office in announcing the demise said in a statement, “George Herbert Walker Bush, World War II naval aviator, Texas oil pioneer, and 41st President of the United States of America, died on November 30, 2018. He was 94 and is survived by his five children and their spouses, 17 grandchildren, eight great grandchildren, and two siblings. He was preceded in death by his wife of 73 years, Barbara; his second child Pauline “Robin” Bush; and his brothers Prescott and William or “Bucky” Bush.”

His son George W. Bush, who served as the country’s 43rd president, released a statement of his own from the family.

“Jeb, Neil, Marvin, Doro, and I are saddened to announce that after 94 remarkable years, our dear Dad has died. George H. W. Bush was a man of the highest character and the best dad a son or daughter could ask for. The entire Bush family is deeply grateful for 41’s life and love, for the compassion of those who have cared and prayed for Dad, and for the condolences of our friends and fellow citizens.”

The family said funeral arrangements would be announced “as soon as is practical.”

President Donald Trump in a statement said, “Melania and I join with a grieving nation to mourn the loss of former President George H.W. Bush, who passed away last night. Through his essential authenticity, disarming wit, and unwavering commitment to faith, family, and country, President Bush inspired generations of his fellow Americans to public serviceto be, in his words, “a thousand points of light” illuminating the greatness, hope, and opportunity of America to the world.

“Along with his full life of service to country, we will remember President Bush for his devotion to family — especially the love of his life, Barbara.”

He added. “His example lives on, and will continue to stir future Americans to pursue a greater cause. Our hearts ache with his loss, and we, with the American people, send our prayers to the entire Bush family, as we honour the life and legacy of 41.”

He sent a follow-up tweet yesterday morning from the G-20 summit in Buenos Aires, Argentina, calling him a “truly wonderful man.”

Also, the US immediate past President, Barack Obama, in a statement yesterday, said: “America has lost a patriot and humble servant in George Herbert Walker Bush. While our hearts are heavy today, they are also filled with gratitude.

“Not merely for the years he spent as our 41st President, but for the more than 70 years he spent in devoted service to the country he loved from a decorated Naval aviator who nearly gave his life in World War II, to Commander-in-Chief of our Armed Forces, with plenty of posts along the way; Ambassador to the United Nations, Director of Central Intelligence, U.S. Envoy to China, Vice President of the United States.”

According to Obama, George H.W. Bush’s life is a testament to the notion that public service is a noble, joyous calling and “whose legacy of service may never be matched with past US leaders”.

He added, “Expanding America’s promise to new immigrants and people with disabilities, reducing the scourge of nuclear weapons and building a broad international coalition to expel a dictator from Kuwait, and when democratic revolutions bloomed across Eastern Europe, it was his steady, diplomatic hand that made possible an achievement once thought anything but ending the Cold War without firing a shot.”

President Emmanuel Macron of France has described Mr Bush as a world leader, who strongly supported the European alliance.

“On behalf of the French people, I convey all my condolences to the American nation for the loss of former President George Bush. He was a world leader, who strongly supported the alliance with Europe. Our sympathy to his family and beloved ones.”

George H.W. Bush and Trump had a contentious relationship recently. Trump did not attend first lady Barbara Bush’s funeral, regularly took shots at fellow 2016 presidential contender Jeb Bush and slammed Bush’s famous “thousand points of light” speech at a rally in July, saying, “Thousand points of light, what the hell was that by the way? Thousands points of light. What did that mean? Does anyone know?”

The former president had several health scares over the past year, including one just days after his wife’s funeral.

Bush was admitted to Houston Methodist Hospital with a blood infection on April 22 — two days after the funeral for his wife of 73 years, former first lady Barbara Bush.