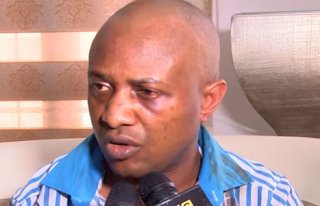 Evans had earlier claimed that he was locked up in the toilet by officers of Special Anti-Robbery Squad, SARS, in Ikeja when Falana visited him.

But at yesterday’s proceeding, Ekundayo told the court that such incident never took place.

“His (Evans) lawyer was not there and none of his relatives was around,” the witness said.

Before Ekundayo’s testimony, Evan in a trial- within-trial insisted that he was threatened by men of the SARS to sign an already prepared statement.

While being led in evidence by his lawyer Olanrewaju Ajanaku, Evans said: “They brought some papers and asked me to sign. My mind told me not to sign and I refused.

“They beat me and one of them used something to hit my head. I was crying and begging them.

“They did not allow my people to come and see me. My father and brother came but they were prevented from seeing me

Prosecuting counsel, Adebayo asked Evans to identify the statement and read the content to the court.

When Adebayo tried to query further, Ajanaku objected, saying his client has answered the question.

Justice Oluwatoyin Taiwo adjourned the case till December 31 for the continuation of trial.