Akwa Ibom will soon be an APC state - Aisha Buhari 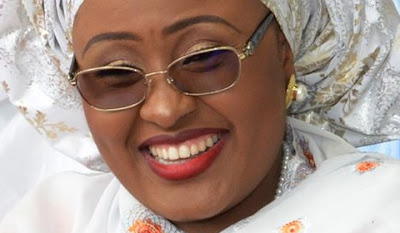 Wife of the President Mrs. Aisha Buhari has predicted that Akwa Ibom State Governor Udom Emmanuel and his wife, Martha, will join the All Progressives Congress (APC).

She spoke in Uyo while inaugurating an empowerment programme for over 11,600 Akwa Ibom women, sponsored by the Future Assured programme, in conjunction with the National Directorate of Employment (NDE).

Mrs. Buhari said the incident at the Victor Attah International Airport when she arrived was an indication that Akwa Ibom State would become an APC state.

She said: “What happened at the airport to me is just mere politics, but when it comes to President Muhammadu Buhari, it is all about a movement, and we have Senator Akpabio in Akwa Ibom to lead the movement.

“As you know, the President is a man of integrity, and for those who believe in his ideology, they should play politics with morality and integrity. What happened at the airport has shown that almost everybody in Akwa Ibom has entered APC, and soon Mr. and Mrs. Udom Emmanuel will join us.”

Mrs. Buhari, who thanked NDE for empowering women and youths, recalled that her programme had empowered people across the six geopolitical zones.

She added: “It pleases me to be here to address you on this empowerment and training programme for women and youths, organised by the NDE in collaboration with my Future Assured Programme

“Since the beginning of this administration, we have empowered thousands of women and youths across the six geopolitical zones of the country. This has been in line with my pledge to contribute to reducing poverty to ensure that women are self-reliant.”

“Future Assured Programme contributes to this programme with the empowerment of 4,000 women. As you are all know that women economic empowerment programme cannot be over emphasised, it specifically addresses five goals of the Sustainable Development Goals (SDGs), such as, poverty alleviation, hunger eradication, gender equality, provision of good jobs and economic growth,” she said.

She thanked Senator Godswill Akpabio for initiating the programme, and the Director General of NDE, Muhammad Lawan, for allowing it to succeed.

Lawan thanked the President’s wife for improving the lives of the displaced, disabled and the disadvantaged. He hailed Akpabio and his wife for hosting the event.

He added that 1,500 young men and women would be trained across the state, while 6,000 would receive certificates to enable them access CBN loans.