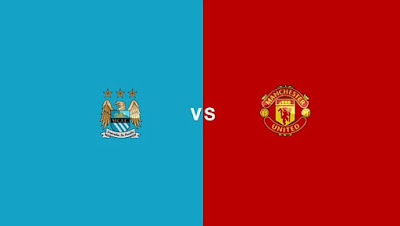 Good afternoon and welcome to Nigerianeye's live text coverage of the Premier League clash between Manchester City and Manchester United at the Etihad Stadium.

The hosts come into this derby sitting nine points clear of their local rivals in the Premier League table, having dropped just four points from their opening 11 games.

However, United recorded a famous 2-1 victory over Juventus in midweek and have now won their last three matches across all competitions.

Make sure you don't miss a moment of the action courtesy of our minute-by-minute updates below.


Manchester City get the bragging rights in the first derby of the season as they run out 3-1 winners over Manchester United, who made a game of it but were comfortably second best today.
Goals from David Silva, Sergio Aguero and Ilkay Gundogan fire the champions back to the top of the Premier League table, whereas United could only muster a Martial penalty in response. Twelve points now separate the two sides after just 12 games! Thanks for joining our live coverage of the match!

90+2 min MAN CITY SUB: A third and final change for City as David Silva is replaced by Phil Foden.

90 min There will be three added minutes at the end of this match.

88 min The Etihad is in party mood now - they know this match is over as a contest now and that City are heading back to the top of the table.

86 min GOAL!  Surely that is game over now! Another long passing move ends up with Gundogan stroking home the killer goal from close range, having been left completely unmarked.
Bernardo picks him out with a good cross into the box, and Gundogan has the time and space to take a touch before firing his finish past De Gea.

85 min Just five minutes remaining in this match now! City are looking to run down the clock via possession now, and United need to do something to upset that rhythm.

83 min This is better from United now. They have City pinned back in their own half and are beginning to put sustained pressure on the defence now.

81 min A long spell of Man City pressure comes to an end with Gundogan working space to shoot on the edge of the box, but he gets his finish all wrong and skews it well wide.

80 min City are beginning to knock on the door again now with 10 minutes remaining of this match. United need to ramp up the pressure in these closing stages!

76 min MAN CITY SUB: The hosts make a change as Aguero is replaced by Ilkay Gundogan.

74 min City break quickly and have a four-on-two scenario with Sterling leading the charge, before picking out Sane. The German goes for goal himself, but blazes a wild effort well off target.

71 min End-to-end stuff momentarily as United and City both look to launch counter attacks in quick succession, the latter of which result in Fernandinho curling an effort into the arms of De Gea.

69 min Sane wins a free kick down the left channel but sees his own delivery easily cleared by United. Just over 20 minutes remaining in this one!

67 min Sane cuts inside from the left flank before dropping the ball back to Fernandinho, who fires his long-range effort off target.

66 min City have responded well to that United goal, quickly reassuming control of possession. You get the sense that they may need that two-goal cushion back, though.

62 min MAN CITY SUB: Change for the home side here as Mahrez is replaced by Leroy Sane.

60 min Half an hour remaining in this match now, and suddenly it is all to play for! City will kick themselves if they let United back into this one.

58 min Game on at the Etihad! United are back in the game as Martial continues his fine recent goalscoring form by rolling the penalty into the bottom corner, sending Ederson the wrong way.

57 min Manchester City have a penalty as Lukaku is immediately involved! He gets to the ball before Ederson inside the box and the keeper wipes Lukaku out!

57 min MAN UTD SUB: It is time for Lukaku now as the Belgian replaces Lingard.

55 min Chance for City to get that third as Fernandinho picks out a brilliant pass to Sterling down the left channel, but the in-form winger takes far too long over his finish and is eventually crowded out when he initially had a clear chance.

54 min Needless to say, the next goal is huge for United now. It would surely be game over if City got a third, whereas a goal back for United would get them right back into this one.

52 min City look in control of this match now, and Mourinho may need to change things sooner rather than later to change the course of this game. Lukaku is among those on the bench, of course.

50 min United came from two goals down to win here in April, of course, but that goal was a huge blow to them. They have been in this game since initially falling behind, but now they have a mountain to climb.

48 min Huge goal for City as they get the two-goal cushion they were after! Aguero blasts his finish into the roof of the net past De Gea, who cannot react in time to turn it over the crossbar.

De Gea's initial kick put his side in trouble as Lingard lost possession on the halfway line, allowing City to pour forward. Aguero exchanges passes with Bernardo in the box before then firing his finish in from a tight angle. De Gea may feel as though he could do better, but it was hit with such power.

46 min United get us back underway at the Etihad Stadium!

Manchester City go into half time ahead in the first Manchester derby of the season, then, and they are worthy of their lead at the interval.
However, they have not pushed on as much as they threatened to in the opening stages of the game and United will feel that they are still very much in this match heading into the second half.

45+1 min There will be one minute of added time at the end of this first half.

44 min Bernardo wins the ball in midfield and immediate races forward after exchanging passes with Silva. The midfielder slides his pass in to Aguero, who fires his effort into the side-netting.

44 min A couple of handball shouts in quick succession as first Smalling and then Fellaini survive the calls, and the referee got them right on both occasions.

42 min Shaw is the first United player in the book for cynical bodycheck on Mahrez.

40 min Five minutes remaining in this first half now and it is now which City deservedly lead, but they have not been able to build on that lead. The hosts' best moments came in the opening 10 minutes.

38 min Mourinho will want to see more from his side going forward with Ederson yet to be tested in this match, but he will be content with how his side have responded to falling behind here. They are very much in this game.

36 min It is all a bit slow for City at the moment - their intensity has certainly dropped since that dangerous opening 10 minutes.

34 min Shaw fizzes a low cross into the feet of Martial, but his touch is heavy and bounces through to Ederson inside the area.

33 min Bernardo is the first name in the book for this derby courtesy of a lunging challenge on Rashford.

31 min It all opens up for Laporte, who tries his luck from range but fires it a few yards over the crossbar.

30 min Mourinho may have expected City to make a faster start than his side in this match, but United have done well to avoid further damage since the opening goal and they are still very much in this one.

26 min Matic cleverly flicks the ball into the path of Martial, who sees his effort well blocked by Stones. The ball is recycled and quickly comes back into the area, but Smalling's header loops onto the roof of the net.

24 min Herrera is dispossessed by Aguero, who finds himself up against four United defenders all on his own. The Argentine is able to advance into the area from the halfway line, but he loses his footing at the vital moment and United are able to nick the ball back.

22 min City are swarming all over United as soon as they lose the ball, but the visitors are beginning to deal with that pressure better now. No attacking signs from United just yet, but they are improving.

20 min United have been better in the last few minutes as they begin to see a bit more of the ball inside the Man City half. They have been slow to get going once again today, but now finally appear to be settling.

18 min UPDATE: There has been a goal in the other Premier League match currently being played, with Cavaleiro giving Wolves the lead away to Arsenal.

14 min Almost another chance immediately as the ball is slid in to Bernardo inside the box, but his attempted pass inside is blocked. City really look in the mood today.

Sterling whips a vicious ball into the box which Bernardo does well to keep alive at the back post, knocking it back into the middle. Aguero is perhaps fouled, but it does not matter as Silva collects the ball and keeps his composure to fire a deflected effort past De Gea.

11 min City have had a whopping 87% possession in the opening 10 minutes, which tells you all you need to know about how this game has gone so far. One-way traffic at the moment.

9 min Aguero gets his head to the resulting delivery, but the whistle has already gone for a nudge on Herrera before the ball arrived.

8 min It is relentless pressure from the home side in the opening exchanges, with United struggling to get out at the moment. City earn another corner as Shaw blocks Mahrez's cross.

6 min City are cutting through United far too easily at the moment. Silva now releases Sterling down the left channel, but the defence scrambles and gets away with only conceding a corner.

4 min Another big chance for City to break the deadlock early as Silva sneaks in behind the defence and is found by an incisive through-ball. He cuts the ball back towards Aguero, but the prolific striker completely misses his shot! The danger is not over yet, but De Gea is able to watch Fernandinho's effort trickle wide.

2 min Quick start from City as Bernardo collects a pass from Fernandinho before cutting inside and rifling an effort past the post.

1 min Here we go, then! City get us underway at the Etihad Stadium!