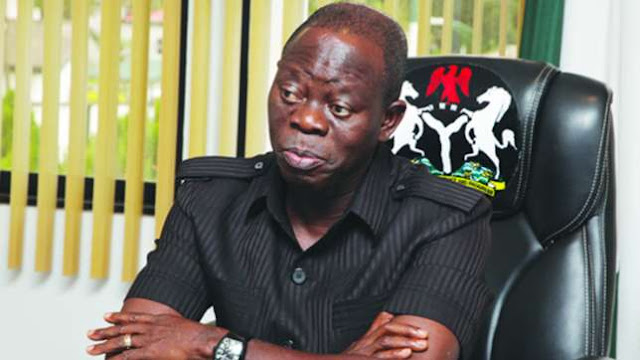 National Chairman of the All Progressives Congress, Adams Oshiomhole, on Sunday denied meeting with the party’s National Leader, Asiwaju Bola Tinubu, over his encounter with the Department of State Services.

Oshiomhole, who was reportedly quizzed by the DSS allegedly over the party’s primaries but maintained that he only had an interaction with the security outfit, explained that there was no reason for him to go to London to see Tinubu when he could easily meet him in Lagos.

Speaking with journalists shortly after an interdenominational thanksgiving service to mark the second year in office of his successor, Governor Godwin Obaseki, in Benin City, Edo State, the former governor stated that he also had unhindered access to President Muhammadu Buhari.

He said, “What am I doing in London? Why will I go to London to see Tinubu when I can see him in Bourdilon?

“What are the issues between him and me that we are to resolve in London? The leader of the party, which is President Buhari, I have access to (at) the Villa all the time.

“I do not need to go to London to see my leader, through the Queen.

“The truth is that once a news reporter succeeds in preaching one lie, he is obliged to preach several lies to sustain the one lie.

“Some of the media, having allowed the opposition to misuse them to publish fake news, they now feel obliged to fake more news. But I am here and I am fine.”

Also speaking, Obaseki said that some chieftains of the APC were against Oshiomhole because of the change being introduced to the party to make no one above the law.

The governor also assured that Nigerians would soon begin to feel the impact of what he called the fundamental changes being made by the President.