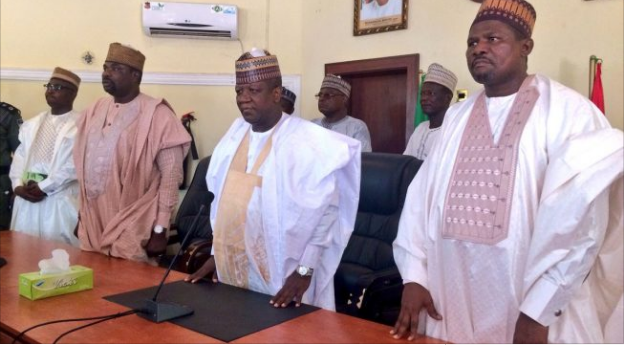 The crisis in the Zamfara state chapter of the All Progressives Congress (APC) took a new turn over the weekend as Abdulaziz Yari, the governor, and some of his loyalists organised a parallel governorship primary election.

Mukhtar Idris, finance commissioner of the state, was announced as winner of the primary which held at the APC secretariat in Gusau, the state capital.

Idris is the preferred candidate of Yari.

All the APC primaries conducted in the state for the 2019 elections ended on a rancorous note.


This made the leadership of the ruling party to dissolve the state executive committee and set up a new panel to conduct fresh primaries.

After raising the panel, the national working committee (NWC) of the party expressed confidence that the APC in the state would meet the October 7 deadline of the Independent National Electoral Commission (INEC) for the conclusion of primary elections.

But as it stands now, the APC in Zamfara does not have governorship, state and national assemblies candidates for the 2019 elections.

While dissolving the state exco, the NWC had warned Yari not to interfere in the primaries. Hence, it is clear that the party leadership would not accept Idris as its candidate.

Yari had dismissed the action of the NWC, accusing Adams Oshiomhole, national chairman of the ruling party, of working against the interest of the state.

He also asked the NWC panel not to visit Zamfara for another election, saying he and his followers would resist them.

“We heard that the committee of the chairman is not in consultation with any working committee. He (Oshiomhole) is trying to be a kind of mini-god…The committee he sent to Zamfara state, I want to say it categorically, they should never step into Zamfara for one minute,” he had said while addressing his supporters on Saturday.

“I, Abdulaziz Yari, governor of Zamfara state, head of government and security, I am saying that the committee sent by Oshiomhole to come and do a dirty job should not dare come into Zamfara state.

“We are ready, including myself, to be taken to the graveyard tomorrow… it’s fight to finish.”

Despite Yari’s threat, the panel visited the state on Sunday but supporters of the governor and Kabir Marafa, a governorship aspirant, clashed and this prevented elections from holding.

At a press briefing on Monday, Gana Mohammed, chairman of the panel, said the materials that were supposed to be used for the elections were still intact.

Mohammed said his committee was preparing to file its report to the leadership of the party.

“A question was asked whether or not the committee that came from Abuja conducted an election in Zamfara state. We did not. We still have our materials and we hope to present our report to the headquarters in Abuja,” he said.

“I and members of my committee still have all our election materials with us.”

Asked the way forward, Yekini Nabena, acting spokesman of the APC, said no decision would be taken until the NWC receives the panel report.

“We’ll have to wait until the committee gets back to Abuja from Zamfara,” he said.

Oluwole Osaze-Uzzi, director of voter publicity of INEC, could not be reached for comments on whether the commission would extend its deadline for submission of names of candidates.

Marafa had raised the alarm that the party might not be able to present candidates for the next general election.

He said this while blaming Yari for the inability to conduct the primaries.