PDP presidential primary: "How Wike is working with Buhari to destroy party" 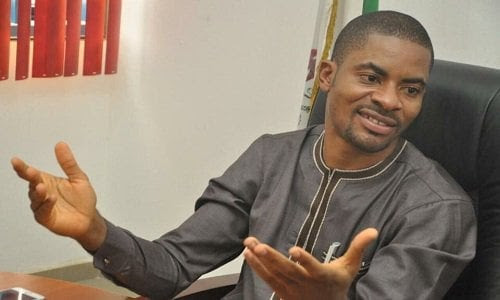 A former New Media Director of the Peoples Democratic Party, PDP, Deji Adeyanju has alleged that the Rivers State Governor, Nyesom Wike is a mole in the party.

Adeyanju, a co-convener of OurMumuDonDo alleged that Wike was working with Buhari’s Chief of Staff, Abba Kyari to secretly destroy PDP.

In a statement he personally signed and confirmed Adeyanju claimed that Wike met with Kyari and signed an agreement to ensure that PDP produce a weak candidate during Saturday’s presidential primary election in Port Harcourt, the Rivers State capital.

The statement titled, “Wike is the Mole in PDP,” Adeyanju highlighted reasons to back up his allegations against Wike.

“Wike is extremely close to the Chief of Staff to the president and has secretly met with the President on numerous occasions on supporting him for a second term, before and after the agreement was signed. Wike is the biggest mole in the PDP.

“As agreed, Wike was mandated to support the emergence of a weak candidate for the PDP against president Buhari in the general election. In return, Rotimi Amaechi Will engineer a crisis in Rivers APC and make the party weak in the State. FG will not interfere in Rivers election.

“Wike alleged the desperation by some PDP presidential aspirants but he’s the one who is desperate.

“10 out the 12 presidential aspirants opposed PH as convention venue, but Wike’s puppet -Secondus connived with Delta governor who is Wike’s friend to take the convention to PH against objections just to pave the way for the manipulation of the convention in Wike’s domain.

“Wike the mole is trying to play the same game Asiwaju Tinubu played in 2011 with Jonathan when he signed an agreement to produce a weak opposition candidate -Nuhu Ribadu against the then president but God has exposed him.

“Almost all the presidential aspirants know the agreement Wike has signed with president Buhari. The party should not beg Wike the mole. They should allow him to do his worse. Energy should be dissipated on how to produce a strong presidential candidate who can defeat Buhari.

“The Board of Trustees and all other organs of the party must save PDP from Wike the mole. The naive supporters of Wike always claim that He is the one that has been funding the party since 2015. One must ask how?
Wike could not fund Edo, Ondo, Anambra, Ekiti, Osun, etc.

“Wike the mole only funds the few hungry people in the party who run to Rivers State everytime they are broke. Wike cannot fund a presidential election. He can not even fund elections in Rivers State and his next-door neighbour Akwa Ibom in 2019.

“The recent shaking up of Wike by EFCC with the arrest of Zenith Bank GMD over N117bn suspicious bank withdrawals by Wike is to put him in line after there were fears that he wanted to rescind on the agreement.

“Wike’s arrogance and the way he threatens the party and its leaders publicly and privately comes from the fact that he has stolen Rivers State funds in his custody.

“If the opposition like, let them be wise, if not: Na dem go SUFFER.”