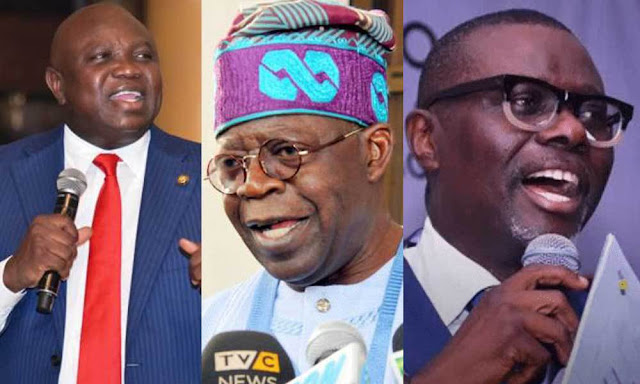 Tinubu’s media adviser Tunde Rahman said last night in a statement on Tinubu’s meeting with the President in Abuja:

“Asiwaju Tinubu and Chief Bisi Akande were invited by President Buhari and it turned out to be a good and productive meeting. Asiwaju was quite pleased to have conferred with the President who has always shown himself to be a committed party member and a true democrat.

“Just like the President, he is looking forward to a good and credible primary that is peaceful and free of rancor. As previously stated, Asiwaju plans to vote in this primary and his position regarding the relative merits of the candidates remains unchanged.”

In the race are incumbent Akinwunmi Ambode and former Commissioner Jide Sanwo-Olu. The primary election is today.

Asiwaju said of his choice in a statement on Monday: “I am encouraged by the presence of a candidate in this primary, who has served the state in senior positions in my administration, the Fashola administration and even in the current one. While possessing a wealth of experience and exposure, he is a young man endowed with superlative vision and commitment.


“Most importantly, he understands the importance of the blueprint for development. He esteems it as a reliable and well-conceived vehicle for the future development of the state. He also knows the value of reaching out and working with others in order to maximise development and provide people the best leadership possible. With people like him at the helm, the state will write the proper history for itself.”

In 377 wards across 20 local governments, members of the APC will vote today.

Every card-carrying member of the party is eligible.

There will be no ballot box and ballot paper. Party members will queue behind the posters of their preferred aspirant.

The mode of the primary is “open direct primary”, which involves open and physical counting of members on queue behind the posters of their chosen aspirants.

They will be accredited by 9a.m. Election will take place by 12 noon. Members will show their APC Identification Card. No white slip will be accepted, Chairman Tunde Balogun said yesterday.

Posters of the two aspirants will be held by their agents. After accreditation, party members will queue behind them.

“They will be counted on the queue and recorded. After that, voting ends. The agents of aspirants will sign. Then, the results will be taken to the local governments, the final collation will be done at the state level,” Balogun told newsmen.

The chairman urged members to troop out to participate in the exercise.

He said the shadow poll will be very transparent and peaceful across the wards, urging members to maintain decorum as they participate in the exercise.”

Ambode is campaigning on continuity. Sanwo-Olu has promised an all-inclusve government – if elected.

Chairman of the electoral panel former Cross River State Governor Clemant Ebri attributed logistics challenge to the shift of the poll from Monday till today.

He told Ambode when he visited the Government House in Alausa: “I also like to apologise for the delay; it had to be postponed as a result of logistics in Lagos, Imo and some other states because of the pressure and work load from the secretariat and other developments that have taken place.”

Raising the stakes on the shadow election, Ebri said: “Lagos is more like a decider and like they say, when Lagos sneezes the rest of the country catches cold.

“So, that is why we are very careful about what we are doing and the National Chairman asked me to send his best wishes to you and ask us to come and do the right thing to the satisfaction of all members.

“Moreso, the President of this country stands for transparency and detests corruption and, a situation where no one feels manipulated.

“The process we are laying out is such that will ensure and guarantee transparency and credibility. We have people of integrity in this panel.

On the integrity of the members, Ebri said: “These are not rookies in politics; they are people who have been tested. You can see senators, former governors, former deputy governor, former member of the House of Representatives; so, this is a star-studded team.

“I can assure you that we have all the experience that you want and you can think about to conduct this exercise. We assure you of our sincerity and transparency and we seek your cooperation in providing a level-playing field.’

Ambode replied: “I receive this election team as being acceptable and credible to me enough to discharge their civic responsibility to the best of their abilities and to also say that whatever it is that is the outcome of the primaries, your presence has also shown that this will be credible and this will be acceptable to me.”

“So, it is very clear to me, all I seek is credible primaries, transparent primaries and level playing ground that we will all be proud of at the end of the day for the outcome,” the governor said, adding:

“There were issues that we have raised that we are also trying to correct.

“The bottom line is this, we are family, we must not go into the elections divided because this is the very first time that our party is controlling the centre and also the state; that is what I want us to continue.

“The issues that I raised have been put in form of a letter which I will pass to the chairman and I believe the committee will look into it judiciously.

“And also I welcome the stakeholders meeting which will allow you feel the pulse of what is going on in the state.”

The panel’s members attended a stakeholders meeting at the Lagos State APC secretariat in Ogba last night to perfect the planning for the election.