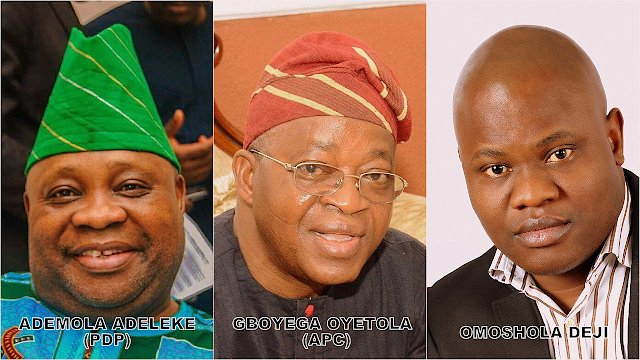 Osun State is presently Nigeria’s political fireworks capital. The incumbent All Progressives Congress (APC) and the winning People’s Democratic Party (PDP) are in a fierce battle for the control of the state after the 22 September governorship election ended inconclusive. The PDP is determined to maintain its lead while the APC has vowed to overturn it. PDP’s Ademola Adeleke garnered 254,698 votes, which puts him in a 353 vote lead against Apc’s Gboyega Oyetola who accrued 254,345 votes. Candidate of the Social Democratic Party (SDP), Iyiola Omisore earned 128,049 votes to come third.


You would recall that Nigeria’s ingenious political and public affairs analyst, Omoshola Deji foretold the outcome of the election and virtually everything he said came to pass. It is recommended that you read the piece titled ‘Osun 2018 Governorship Election: Foretelling the Outcome’ before you digest this.

Adopting a different methodology as dictated by the situation in Osun, this piece takes a different turn by foretelling the outcome of the upcoming rerun election with the analysis of figures. The pundit would adopt a quantitative approach and use mathematics to solve politics. As you read on, please be aware that you may need to slow down at some point in order to accurately grasp the figure calculations and key into the analysis.

The official results released by the Independent National Electoral Commission (INEC) will be used to examine the vote pattern in Osun. It will also be used to provide an insight on what the rerun scores may be. The subsisting results would likewise be used to evaluate the parties’ coalition strengths in places where the rerun elections would be conducted. Findings from all these inquires will be used to foretell who will most likely become the governor-elect in Osun State.


During the first round of the election, the scores of the top five political parties in the four local governments where rerun would hold, in seven polling units, are:


The APC garnered the highest number of votes in the results above. This result would make politicians, depending on which divide they belong, rejoice or panic that the APC would defeat the PDP in the rerun election. APC is indeed formidable enough to triumph and the above results could tempt one to foretell her win. Nonetheless, before making a prediction, APC’s domination of the four local governments where rerun would be conducted, in seven units, must be tested to ascertain the party’s strength, especially after joining forces with Iyiola Omisore, the SDP governorship candidate. Both the APC and the PDP have been reaching out to other parties for support in order to increase their chance of winning the rerun.

ADC candidate, Fatai Akinbade would most likely support the PDP based on the ADC chieftains (ex-President Obasanjo and former Osun Governor Oyinlola’s, both ex-PDP members) frosty relationship with the APC and President Buhari. Moreover, Akinbade was recently a member of the PDP, but he dumped the party for the ADC when he lost the governorship ticket to Adeleke. The PDP made efforts to woo Omisore, but lost him to the APC. His announcement to support APC win is baffling. Omisore was once a senator and governorship aspirant under the PDP. Being in the third position, Omisore is a strong election winning determinant as 48% of the votes being contested are in Ife South and Ife North Local Government which are mainly his stronghold.

More to add, Omisore’s father, Oba David Omisore, is the king of Garage Olode, a town in Ife South, where election was cancelled in two units. But then, the PDP governorship candidate’s running mate, Albert Adeogun is an Ife indigene.

Moshood Adeoti of the ADP allegedly contested against his former party, the APC, because he was displeased that he lost the governorship ticket to Oyetola. Despite defecting, one may argue that Adeoti’s body, soul and spirit is APC, having served as the Secretary of Government in incumbent Governor Rauf Aregbesola’s administration for over seven years. Be that as it may, Adeoti may not just team up with the APC or the party has decide to run their race to victory without his input.

Having established that the SDP is teaming up with the APC and the ADC candidate would most likely work for the PDP, the voting strength of ADP’s Adeoti would be merged with that of the PDP. Leaving ADP, the fourth place occupant, out of the analysis, would be irrational. One may also argue that the APC’s decision to team up with Omisore instead of Adeoti is an indication that the party probably do not want to associate with Adeoti and his party, the ADP. At this juncture, it is essential to use the subsisting local governments’ results to evaluate the influence of political alignments on the winning chances of the APC and the PDP.


Weighing the APC+SDP coalition strength against that of the PDP+ADP+ADC in Ife North would give us a calculation: APC+SDP’s 11685 votes minus PDP+ADP+ADC 6325 votes equals to 5360. If the above party alignment plays out, APC’s Oyetola has about 5% edge over PDP’s Adeleke in Ife North.

A summation of PDP, ADC and ADP votes would also give an idea of their alliance strength. PDP’s 4872 votes + ADP’s 561 and ADC’s 136 votes = 5569 votes. Comparing the APC+SDP vote garnering strength against that of PDP+ADP+ADC is to simply minus 13374 from 5569. The result of that is 7805. The result shows that APC’s coalition with SDP will hike the former’s winning chance by about 8% in Ife South.

Comparing the APC+SDP coalition strength against that of the PDP+ADC+ADP (7485-8243) will give us 758 votes’ difference in favor of the PDP. This time around, the APC coalition with the SDP has no positive effect. PDP’s projected coalition hiked the party’s winning chance by a meagre 0.8% in the rerun polling units in Orolu.

The above political mathematics of election results in the four local governments controlling the polling units marked for rerun shows that APC has a substantial edge over the PDP. APC recently had the largest votes in the four local governments, and an assessment of the likely coalition of parties for the rerun shows that the APC will defeat the PDP. APC’s Oyetola have a 55% earning-more-votes advantage over the PDP’s Adeleke in Ife North, 8% in Ife South, and -0.8% in Orolu. The APC has over 16% advantage to earn more votes than the PDP in Osogbo.


In these four local governments, the total votes earned by the five parties is 103,638. Overall, APC defeated PDP with 9938 votes. A Summation of the APC and SDP votes equals to 66111. A summation of PDP, ADC and ADP votes equals to 37527. The difference between APC+SDP and PDP+ADC+ADP strength testing votes (66111-37527) equals to 28584 votes, in favor of the APC wing. This implies that if the party collaboration occurs as stated, APC’s Oyetola has about 30% advantage of earning more votes than PDP’s Adeleke in the rerun election.

Aside the political calculations, one crucial setback for APC’s Oyetola is the remarkable rise in Adeleke’s popularity after INEC declared a rerun in the polling units that their results were earlier cancelled. Adeleke’s popularity rose on the argument that he has already scored the highest votes as constitutionally required and should have been declared winner. People may decide to vote en masse for Adeleke in the rerun, if the tale that APC leaders allegedly compelled INEC to declare the election inconclusive in order to manipulate the process for Oyetola’s magnets public sympathy.

Then again, if Adeleke loses the election, there would be severe crisis in Osun State. Legal suits to nullify his candidacy and police decision to arraign him for alleged exam malpractice on the eve of the election has made people believe that INEC is also configured to rob Adeleke of his win. The unnecessary meddling of government agencies in political issues really needs to be checked.

After the in-depth analysis of votes to determine the expected political behavior of the Osun electorates and the parties’ coalition strengths, the pundit is left with no other option than to foretell the victory of APC’s Gboyega Oyetola in the upcoming rerun. The data and methodology employed to foretell the election outcome is scientific and beyond the pundit’s capacity to control or influence. The findings sincerely favors APC’s Oyetola.

This is one of the rare election prediction that the pundit is having a strong, unexplainable conviction that contradicts findings. The pundit is having a deep feeling that PDP’s Adeleke could emerge, but all the data evaluated does not point to him having a win. Adeleke would win, if Omisore’s public declaration of support for the APC turns out to be a deceit planned by him and Senate President Bukola Saraki? Omisore is one of the notable politicians that is extremely anti-APC and wants to end the party’s reign in Osun State. Is it impossible for Omisore to announce his support for APC’s Oyetola and tell his supporters to vote PDP’s Adeleke?

Note: Foretelling an election outcome doesn’t mean the pundit have access to one sacred information or the election winning strategy of any candidate. Assessing the strengths and weaknesses of candidates to predict who’ll win is a common practice in developed nations. This doesn’t mean the pundits are compromising the electoral process or influencing the election results. Osun people have already decide who they’ll cast their votes for and nothing - not this piece - can easily change their minds. The pundit’s election prediction is made based on the expectation of a free, fair and credible election, not electoral fraud.

*Omoshola Deji is a political and public affairs analyst. He wrote in via moshdeji@yahoo.com