A+ A-
Print Email
SKC Ogbonnia, a presidential aspirant in the All Progressives Congress (APC), says President Muhammadu Buhari will break the law if he accepts the N45 million expression of interest and nomination forms bought for him by a group. 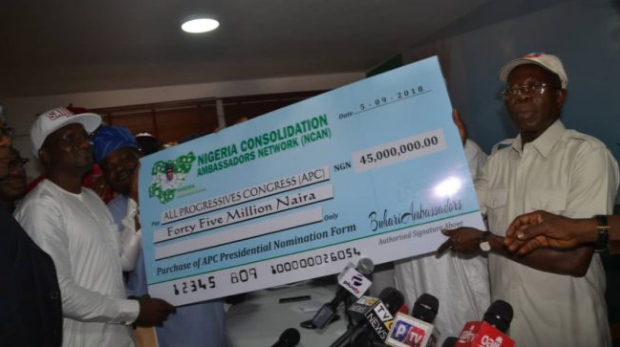 On Wednesday, a group known as known as the National Coordinator of Nigeria Consolidation Ambassador Network (NCAN) presented a cheque of N45 million to Adams Oshiomhole, chairman of the All Progressives Congress (APC), for the purchase of presidential nomination forms for Buhari.

The group said it took the action because it wants the president to continue his “good work”.

But in a statement on Thursday, Ogbonnia said except he rejects the form, the president would contravene section 91 (9) of the country’s electoral law.

“It was revealed yesterday that a group purchased the nomination form for my primary opponent, President Muhammadu Buhari,” the statement read.

“The president ought to reject the form.. If he accepts the form, it contravenes Section 91 (9) of Nigeria’s electoral law (as amended): ‘No individual or other entity shall donate more than one million naira to any candidate’.”

Ogbonnia said he had written a letter to Oshiomhole to complain about the exorbitant nomination fees but did not get a response from him.

“In a recent letter to chairman Adams Oshiomhole, I enumerated the consequences of exorbitant nomination fees, especially coming from a progressive party,” it read.

“As at the time of this statement, I am yet to receive a reply. Since the deadline is Monday, September 10th, 2018, I am committed to paying for my form, but it is only fair that President Buhari does not break the law to pay for his.

“I expect our great party to ensure a level playing ground throughout the primaries.”