Do not be afraid to vote – Adeleke begs electorate 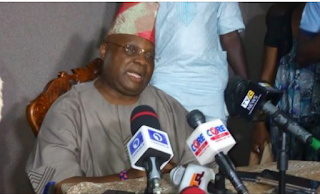 The Peoples Democratic Party’s candidate for the Osun State governorship election, Senator Ademola Adeleke, has appealed to the electorates not to be afraid to vote for him on Thursday.

The Independent National Electoral Commission, INEC had on Saturday declared Osun election inconclusive after the difference between the two leading parties, the PDP and the All Progressives Congress, was lower than the number of the votes cancelled.

The Senator in a recent video appreciated Osun electorates for voting for him in the Saturday’s election.

He, however, called on them to persevere and ensure they come out enmasse again on Thursday to vote for him.


“Thank you Osun people for putting APC to shame despite all their powers.

“Do not be tired, do not be afraid to vote again and come out in numbers on Thursday.

“We must make Osun great again,” Adeleke said in a video while speaking in Yoruba language.

The rerun will hold on Thursday in the state.