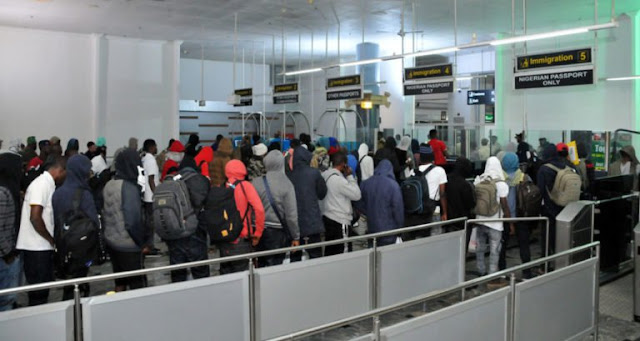 Onyeama made this known on Monday in Abuja while fielding questions from newsmen, and said that the evacuation was done in two batches of 155 persons and 200 persons.

He said that the second batch of 200 fans was returned to the country along with 17 Ghanaian football fans also stranded in Russia on Sunday.

He stated that the money spent on the exercise was huge, particularly in the hard times in the country, and urged Nigerians to travel out of the country in a regular and legal manner.

According to the minister, by airlifting the 17 Ghanaians, Nigeria has again brought to the fore, its `Big Brother’ role in Africa.

He recalled that the first batch of 155 fans, including a nursing mother, were evacuated from Russia after the Mundial in July,

The Nigerian mission in Russia had said that some of the fans initially profiled to be evacuated absconded and urged them to report at the mission as the government had made provision for their return.

Onyeama explained that the evacuation of the stranded fans followed a directive by President Muhammadu Buhari to Onyeama and his Aviation counterpart, Hadi Sirika, to immediately evacuate the stranded Nigerians back to the country.

“A week ago, we learnt that there was another huge number of Nigerians stranded and Russian authorities were going to take very strong measures.


“And again, the President directed that another plane should be made available to go and bring them back.

“They were 200 of them that were brought back on Sunday at a cost of one million dollars to the country,” he said.

He said that the exercise was a clear indication of Buhari’s determination to safeguard Nigerians and the interest of Nigerians wherever they may be compromised in the world.

Onyeama said the his Ghanaian counterpart, Shirley Botchway, who visited him earlier on Monday, expressed appreciation to the Federal Government for bringing back the 17 Ghanaian fans.

He said that the stranded fans expressed depressing and frustrating times as some of them recounted that they were scammed by travel agents “by cancelling their return tickets”.

“We will, however, take the matter up with the travel agents; we will get to the bottom of the matter.

“It is very depressing and very annoying because we have a lot of challenges in our countries and the few resources we have, we want to utilise it on Nigerians.

“It is not to spend money to bring back people who just act in a very irresponsible fashion.

“We really have to work hard to stop this manner of trying at all cost to get to European countries in an irregular manner,” he said. (NAN)