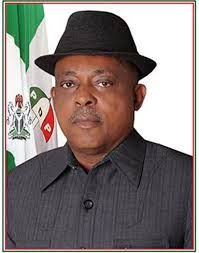 The National Chairman of the Peoples Democratic Party, Prince Uche Secondus, has called on the United Kingdom to expel President Muhammadu, who he accused of hiding in England to allegedly undermine democracy in Nigeria.


He said that Britain should not allow its environment to be turned into what he called “a haven for anti-democracy conspirators.”

Secondus said in a statement signed by his Media Adviser, Mr Ike Abonyi, that the President left the country for the UK for 10 days’ leave to enable the nefarious activities they lined out against democracy to be executed in his absence.

He said that the final plan for the invasion of the National Assembly was concretised when the former Senate Minority Leader, Godswill Akpabio, visited the President in London last weekend.

According to him, the siege to National Assembly leaves no one in doubt that President Buhari and his ruling All Progressives Congress are out to destroy the hard-earned democracy because they can no longer fit into it.

Secondus also saluted the courage of the Vice President, Prof Yemi Osinbajo, for sacking the Director General of the Department of State Services, Lawan Daura, to show that Nigeria couldn’t be hijacked and ruled by cabals.

He said that democrats all over the world did not need any further evidence to show that President Buhari and the APC had suspended democracy and were now running a draconian administration.

Secondus said, “Nigerians and the international community have continuously watched this administration harass and intimidate the legislature and judiciary as well as others in opposition in their bid to create a dictatorial regime.

Meanwhile, the PDP, through its spokesperson, Mr Kola Ologbondiyan, has called on the National Assembly to immediately pull the full weight of all legislative instruments against President Buhari, saying that was the only way to save the nation from an imminent collapse.

In a statement in Abuja on Tuesday, the party said that the invasion of the highest legislative institution by agents of the Buhari-led executive, a few months after the Senate mace was blazingly carted away by armed hoodlums, was condemnable, reprehensible, unpardonable, and completely unacceptable.

“President Buhari and his APC have consecutively and deliberately put our nation and its democracy on harm’s way and the National Assembly, as representatives of the people, must eschew all partisan interests and save the nation by immediately deploying all legislative instruments against President Buhari before it is too late,” the statement said.

The party went further to ask Osinbajo to shed the idea of using the sacked Daura as ‘the fall guy’ for Tuesday’s invasion of the National Assembly by security forces.

The PDP insisted that the invasion was with the absolute knowledge and approval of the Presidency and national leadership of the APC, adding that Daura’s sacking was an afterthought, diversionary and deceitful.

“The Presidency’s sacking of Daura was a damage-control stunt and a knee-jerk gimmick which came as a response to the national and international outcry against the armed invasion of our legislature by security agents as directed by the Buhari Presidency.”

“The action of security agents that blocked the National Assembly is treasonable and must attract appropriate sanctions under our law. It is not enough to take a populist approach of easing Daura out of office.

“Our party demands an immediate investigation by an independent panel of inquiry headed by a retired Chief Justice of Nigeria to examine the remote and immediate cause of the invasion,” a separate statement from Ologbondiyan on Tuesday also said.

The Ekiti State Governor, Mr Ayodele Fayose, has described today’s invasion of the National Assembly by armed security men as a coup against the people of Nigeria.

Reacting through his Special Assistant on Public Communications and New Media, Lere Olayinka, Fayose said, “Today is a sad day for Nigeria. It is a sad day for democracy and it is a day that all Nigerians must begin to ask what took us to this ignoble state as a country and people.

“Nigerians should ask whether there would have been this APC government if the PDP government of Dr Goodluck Jonathan had acted this way.”

In a similar vein, the Ekiti State chapter of the party has hailed the Federal Government for sacking Daura.