Confusion, comedy and drama at the National Assembly 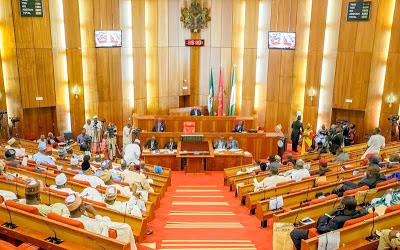 It was a day after the leadership of the legislature announced a meeting of principal officers of the Senate and the House of Representatives. The meeting was scheduled for 12 pm.

It was to be followed with another one with the Independent National Electoral Commission (INEC) Chairman Prof Mahmood Yakubu. But, as early as 7am, all entry points into the National Assembly complex had been taken over by security personnel.

For over an hour, they prevented people, among them lawmakers, management and staff of the National Assembly and journalists covering the assembly – from accessing their offices. Not even visitors were spared. Some journalists who attempted to pictorially record the development had their gadgets seized by the hooded DSS operatives. Some of their gadgets were returned to their owners back intact. But, a few others got their phones and recording equipment damaged. There were several alternations and stand-offs with the security operatives as some of the lawmakers attempted to force their way into their offices.

After about one hour, security was a bit relaxed and the people were allowed in after due scrutiny. The main lobby, located directly in front of the Senate Chambers became a meeting point. Chairs were fetched from adjoining halls for the lawmakers to take their seats.

The upper chamber had been locked, since the lawmakers proceeded on recess from July 25 to resume September 25. The senators that assembled at the lobby were mostly the ones loyal to the President of the Senate, Dr. Bukola Saraki. They were about 47 in number. They were joined by some House of Representatives members.

News had filtered in the previous day, that some senators of the ruling All Progressives Congress (APC), led by the Senate Majority Leader, Ahmed Lawan, had hatched a plot to impeach Saraki and the Deputy Senate President Ike Ekweremadu. Saraki’s sin, according to the Lawan group, was his decision to retain his seat after defecting to the opposition Peoples Democratic Party (PDP). As the pro-Saraki senators gathered at the lobby of the National Assembly, the Lawan camp was said to be meeting at a secret location somewhere at the Asokoro District in the capital city.

After sitting for hours, some of the lawmakers started showing signs of fatigue, with a few of them dozing off on their seats. By 1pm, hunger set in. But, controversial Senator Dino Melaye (Kogi West) had a solution. He had ordered for snacks and soft drinks for the famished lawmakers as refreshments.

The camp became livelier as they devoured the refreshment and washed it down with bottles of soft drinks. A few of them actually came prepared as they came with bottles of wine – alcoholic and non-alcoholic.

Throwing banters at one another, Senator Albert Akpan (PDP, Akwa Ibom) told his colleagues that he was tired of being holed up at the lobby. Facing Melaye, Akpan said jokingly: “Look, I am tired o, and I am going to defect”. Meaning he would abandon the Saraki group for the Lawan camp. Quickly, Melaye removed Akpan’s pair of shoes, saying: “Oya, let me see how you can leave without your shoes”. Melaye then handed the pair of shoes to Senator Peter Nwaoboshi (Delta) who quickly went to hide them. Then Melaye teased Akpan: “We can’t allow you to defect like your former boss”, ostensibly referring to Senator Godswill Akpabio, who had just resigned his position as Minority Leader after announcing his defection to the ruling APC.

Then out of the blues, news filtered in about the sack of the DSS Director- General, Lawal Musa Daura. The initial reaction among many of the senators at the lobby was that of disbelief. “It can’t be true”, some of them declared. But, the confirmation soon came that Acting President Yemi Osinbajo actually signed Daura’s sack letter.

The news brought some relief to the pro-Saraki senators who were waiting at the lobby, in anticipation of the long awaited “offensive” from the Lawan group. The DSS operatives who had taken position at different points started converging in groups of twos and threes. They were discussing in whispers with disbelief in their countenance.

They had received the news of the sack of their boss. They started milling around in a secluded area of the lobby, apparently discussing what to do. A few minutes after, they started leaving the National Assembly complex the same way they came.

The police then resumed their official duties as security personnel attached to the legislative complex. Instantly, the mood at the lobby swung from melancholy to a joyous one. By 2.47pm, Saraki walked in to a tumultuous reception. Looking triumphant and resplendent in his grey-flowing gown, he was welcomed with a loud ovation and chants of Oloye, Oloye by the entire assemblage of lawmakers and workers.

After acknowledging cheers for about 15 minutes, he left the lobby and made his way out of the complex. At this point, it was obvious that the siege was over. The lawmakers started dispersing one after the other. And the day’s job was done.

Confusion in the National Assembly

There was more confusion in the National Assembly yesterday. Some lawmakers, who had adjourned on July 25 till September 25, showed up at the sprawling complex on a day when only principal officers were invited to a ‘crucial meeting’.
Drama started at about 6.30am when armed and masked personnel of the Department of State Services (DSS) operatives barricaded the National Assembly’s second gate.

The operatives initially denied senators and House of Representatives members access into their offices within the National Assembly Complex.

The lawmakers were only allowed in when a House member Oboma Goodhead (Rivers) challenged the operative and dared them to shoot her.

Like the Rivers lawmaker, all early comers into the National Assembly were prevented from entering the complex.

The arrival of the Peoples Democratic Party (PDP) senators compounded the tensed situation. The PDP senators appeared to have prepared to do battle with whoever stood in their way.

Two of the early arrivals – Senators Rafiu Ibrahim (Kwara South) and Dino Melaye (Kogi West) – were prominent loyalists of Dr. Bukola Saraki, who has been under to relinquish the Senate President’s position, following his defection to the opposition Peoples Democratic Party (PDP).

Ibrahim and Melaye went straight to keep watch over the door leading to Senate chamber in an apparent move to prevent entry into the chamber.

By 10:00am, the situation became more charged as unconfirmed information began to fly around that some lawmakers were plotting to remove Saraki and his deputy Ike Ekweremadu.

Senator Ben Murray Bruce later emerged in the foyer from where he and his colleagues were keeping vigil at the Senate chamber door to tell reporters that they were waiting for former Senate Minority Leader, Godswill Akpabio, to lead the invasion of the National Assembly.

Bruce noted that they were informed that Akpabio was allegedly mobilised to lead those who planned to invade the National Assembly to impeach Saraki and Ekweremadu.

The Bayelsa senator, who also described the situation as a coup added: “This is the worst coup I have ever seen. President Buhari should fire all the people involved in this coup. The sacked DSS DG was just made a scape goat. He was sacrificed for the interest of others.”

Other lawmakers were asked to leave their vehicles outside the complex gate.

Lasun spent about 10 minutes inside the complex and came out to address reporters.

He said that the meeting of the leadership of the National Assembly could not hold due to the siege on the complex by men of the DSS and the Nigeria Police Force.

The deputy speaker, however, denied knowledge of any plot to impeach the senate president and his deputy.

He explained that the leadership meeting was called off as he made his way through the gate.

Lasun further said that it will be impossible to impeach Saraki without following the due process.

He also saw no wrong in the convergence of his colleagues on the lobby of the White House that housed the two chambers of the National Assembly, saying it was their own way of defending the nation’s democracy.

Lasun said: “The meeting has been called off now. Until I got here this afternoon, I didn’t know there are others issues. I have come here specifically for the meeting of the leadership of the National Assembly.

“I got the message through text message that the meeting scheduled for 12pm has been called off. For our colleagues that are keeping vigil in the lobby of the chambers, I won’t say more than that is the only way they feel they can defend our democracy. There is nothing negative about it because there can never be a National Assembly if there are no legislators.

“Everybody read it on the pages of newspapers but don’t forget, this is the normal time for our annual recess and so, we have not done anything unusual.

“I don’t know the agenda for this afternoon’s meeting but with the situation on ground now, you all know that a meeting can never be peacefully held.”

“However, don’t forget that it is difficult to impeach an officer of the National Assembly because no matter the method you are going to use, you need two third of the members and not two third of sitting members but two third of the totality of the numbers of the legislators before you can impeach.”

On his own, Melaye said that what happened at the Assembly Complex yesterday was a civilian coup and vowed that PDP senators were determined to continue to stand up for democracy.

The Kogi West senator claimed that those behind the impeachment plot planned to import a mace from Nasarawa State House of Assembly.

There was a report that the senators opposed to the national assembly leadership were articulating their position at a popular hotel within Abuja.

Banks and other businesses in the complex were closed till evening. Vehicles of lawmakers clogged at the entrance of the complex and hundreds of staff and visitors milled around the various gates, barricaded DSS vehicles. There were very few police personnel.

The Clerk to the National Assembly (CNA), Mohammed Sani Omolori, was also denied entry into the complex. He was denied access by security operatives.

However, having found that the operatives might be under strict instructions from above, Omolori, who contacted someone on the phone. He was told that he could go in.

“How can I go in when my staff are not allowed. Who am I going to work with?” He asked the person on the other end. After several minutes of muted conversation, the CNA turned back towards his car.

Before entering his vehicle, he had a word with the Chairman of the staff union, Ahmed Bature, whom he told to calm the workers down. He entered his car and left after spending less than 15 minutes within the complex.

Bature thereafter addressed the few workers at the gate briefly. He told them to calm down, that those who might want to wait behind could do so but advised that since the CNA had left, it would be better to watch developments from their homes.

The senate president who was billed to address the press today, walked into the National Assembly lobby around 3.40pm.

He walked into the warm embrace of his loyalists and sat with them at the lobby for few minutes before heading for his office.

As at last night, 49 senators had signed a register in what appeared to be a vote of confidence on Saraki.

Senator Biodun Olujimi (Ekiti South) coordinated the signing of the vote of confidence register. She was assisted by Ibrahim.