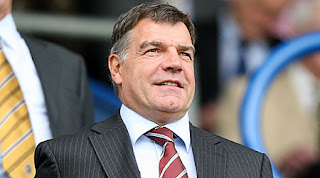 Crystal Palace manager, Sam Allardyce has slammed Arsenal boss, Unai Emery, over his decision to try playing out from the back against Manchester City.


Arsenal were beaten 2-0 by Pep Guardiola’s side in their first match of the season on Sunday afternoon.

Emery, who replaced Arsene Wenger as the Gunner manager got off his reign in a bad start at the Emirates.

Goals from Raheem Sterling and Bernardo Silva in each half handed all three points to the visitors.

Arsenal particularly struggled to build from the back, with Petr Cech unable to adjust and almost passing the ball into his own net.

“I mean, even the Arsenal crowd cheered when [Cech] dropped one in the opposition’s half.

“You cannot just force the only way to play is this way in this country.

“We are getting obsessed with this stupid let’s play out from the back, split the centre-halves either side of the 18-yard box and go and play from there. It’s utter rubbish to consider to play like that all the time.”