No man of honour will return to PDP - Oshiomhole 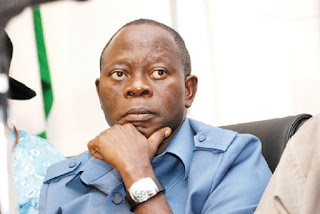 The National Chairman of the All Progressives Congress, Adams Oshiomhole, on Monday said there was no man of honour, who left the Peoples Democratic Party because of its alleged crimes against the nation, that would want to return to the opposition party.

He insisted that he was not losing sleep over the emergence of a faction of the party called Reformed-APC.

Oshiomhole, who spoke in an interview with State House correspondents at the Presidential Villa, Abuja, commented on the alleged plan by the R-APC members to leave the APC on Thursday.

He said no matter their irritations in the ruling party, no aggrieved member should be thinking of returning to the PDP.

He said, “No, I am not losing sleep. I am sleeping very well. I still maintain that I don’t see any man of honour who with his eyes open left the PDP on the account of their gross mismanagement, abuse of the treasury and all of the crimes that the PDP committed; I don’t see them, whatever their irritations, that can be justifications, to return to that house.

“All we need to do is to play back their own tape about what the PDP represents and why they left. I still hold the view that you cannot vomit in the morning and convert it to lunch in the afternoon, if you have honour. That position still remains the same.”

Despite his position, Oshiomhole explained that the party could distinguish between those who had genuine complaints and those he described as mercenaries.

He said the party would try and listen to those with genuine grievances but would not change its core values to accommodate the mercenaries who he said were after personal issues.

He said he would not lose his sleep because of people who he claimed could not deliver their unit during elections.

He however did not disclose those who fall under the two categories of mercenaries and those with genuine complaints.

Oshiomhole said, “I have made this point clear that we can distinguish the mercenaries from those who genuinely have complaints. Our business as party leaders is to try and manage, listen and find solutions to those who have verifiable complaints.

“But those who are permanent mercenaries and are in this business for personal issues, there is not much we can do about that and we are not going to change the core values of the party in order to retain them.

“So, let me reinstate, we remain committed and I have said so in my acceptance speech when I was elected, that we acknowledge the fact that there are people with genuine complaints. For such people, we are ready to listen and act on the basis of justice, fairness, no arrogance and exclusion. I remain committed to those.

“However, on principle, I do not deal with political mercenaries, that remains my position. I will not miss my sleep because a lot of these guys cannot on a good day deliver their units.

“We have the records that tell us who won elections where. I am a tested fighter. I fought them from Edo from zero- zero and I overcame their most powerful godfathers.

“So, I know what I am talking about. I speak from experience and I will talk, negotiate and persuade but there are core principles that are not negotiable.”

Begging, R-APC, not an act of cowardice — National chairman

Also in Abuja on Thursday, Oshiomhole explained why he had been begging members of the R-APC not to leave the APC. He said that his action was not an act of cowardice.

Oshiomhole, while speaking at the launch of a book by Senator Bukar Abba Ibrahim (APC, Yobe-East), pointed out that the appeal being made to the aggrieved members was all about restoring peace and getting justice for those who deserved it.

He stated that it was not as a result of being jittery.

Oshiomhole said, “Throughout the weekend and up till today (Monday), many of the national dailies reported different stories with the impression that I have not been sleeping within the last one week as a result of alleged midnight meetings with aggrieved party members, who they say I have been begging not to leave the party.

In its response, the PDP described the former governor of Edo State as fake.

It said that while he boasted during the day, he would visit aggrieved members of the APC at night, begging them not to leave the ruling party.

The National Publicity Secretary of the party, Mr. Kola Ologbondiyan, who spoke with one of our correspondents, said that both Oshiomhole and the national leadership of the APC had become jittery over the planned defection.

He said, “We will rather forget and ignore him. He is a drowning man and his party will soon become the opposition party in Nigeria. That is why he’s busy running his mouth.

“In day time, he goes out shouting, calling people names but at night, as from 2am, he goes about visiting and begging people he had abused, asking them not to leave and offering them positions and tickets.

“We should rather ignore him. We understand his predicament. So, we won’t waste our time talking to or responding to a fake man who is heading a faction of the APC.”