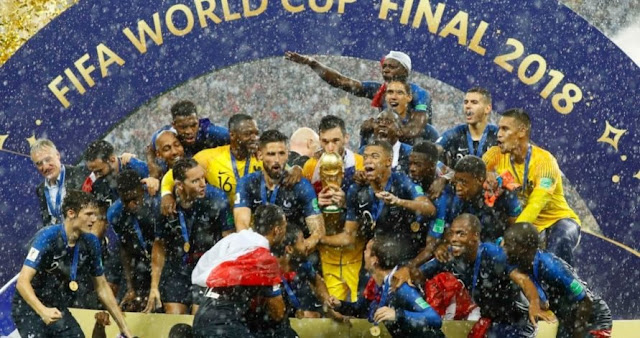 France have emerged World Champions after defeating Croatia 4-2 at the Final of the Russia 2018 World Cup in Moscow on Sunday.

An own goal by Mario Mandzukic gave France a 19-minute lead.

Antoine Griezmann’s ball-in was superb, left-footed and flat, Varane was close to winning it but instead it was England’s nemesis, Mario Mandzukic, who flicked a header into the top corner of his own net.

There was a free-kick and was nodded down, it bounced around just inside the area and Perisic then took a composed right-footed touch to bring the ball into his arc and then battered home left-footed, via a slight deflection.

France took the lead on 38 minute through a penalty, thanks to VAR. Griezmann easily converted the kick.

France made it 3-1 after Paul Pogba’s super strike on 59 minutes.

Pogba started it with a brilliant ball forwards into the run of Kylian Mbappe, he carried it downfield, and found Griezmann who then teed up Pogba. His shot was blocked but the ball came back to him, and Pogba clipped home left-footed past an unsighted goalkeeper.

Kylian Mbappe made it 4-1 for France on 65 minutes. With the goal, Mbappe becomes only the second teenager to score in a World Cup final after the great Pele.

Again, Danijel Subasic did not cover himself in glory in the Croatian goal, he took a step to his left and Mbappe drilled into the other corner from about 22 yards.

Mandzukic reduced the tally for Croatia on 69 minutes. Hugo Lloris was to blame. The Spurs keeper got a back-pass, tried to take a touch around Mandzukic and he tackled him and put the ball into an empty net.