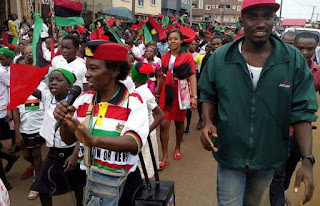 Ahead of the 2019 general election, a coalition of pro Biafra groups have warned the Independent National Electoral Commission, INEC, as well as political parties and aspirants to desist from plans to conduct elections in the former Eastern region in 2019.


The groups; Biafra Defence Council, All Youths For Biafra, among others, insisted that the restoration of the Biafra republic is more important to the people of Biafra than the conduct of elections which it claimed would further enslave Biafrans.

Briefing newsmen in Aba, the groups lamented that the federal government under President Muhammad Buhari had failed to protect lives and properties of Biafrans and vowed to ensure the liberation of the people of the former Eastern region from oppression of the Nigerian government.

Spokesmen for the groups Comrade Sunny Okeh and Chidi Otah, said, ”Politicians from the former Eastern region should not be deceived; there will be no election anywhere in Biafra land in 2019. We are issuing this warning to our politicians that what ought to be paramount to them should the restoration of the Biafra republic, not elections. Election is not the solution to the problem of the Biafra people. We have been electing people to political offices, but this has only brought untold suffering and hunger to the people. We are using this medium to warn political parties and aspirants to stop any form of campaign in Biafra land.

”We want to re-emphasize that there will no election in Biafra land in 2019.The international community has been informed and Biafran people have been sensitized. Elections in Biafra land have only produced servants to the Hausa /Fulani oligarchy and those who feed on crumbs from their table. No force can challenge our resolve. It is our determination to restore Biafra republic where its people will greater freedom and accommodation.”

The groups added that they have mapped out strategies to ensure that no electoral activity is held in all the territories of the Eastern region.