World Cup: I'm ready to play in any position - Mikel 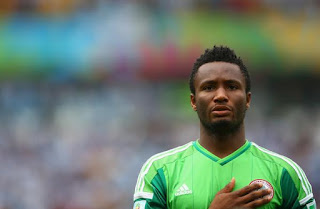 Super Eagles’ Captain, John Mikel Obi at a press conference in Essentukiia yesterday, said that he was ready to play in any position his Head Coach Gernot Rohr drafts him to play from in the ongoing Russia 2018 World Cup.

He sounded confident as regards playing as both offensive midfielder and defensive midfielder, which his former Coach at Chelsea José Mourinho preferred him to operate for the Eagles like he did while playing under him at Chelsea.

“I have worked with Mourinho for a long time and he knows me very well. ” I have played in this advanced role for close to two years now and people never complained until we lost this game. “I understand the feelings of everyone because of the result and how we played.

Personally, I am ready to play anywhere the coach wants me to play.

” I am comfortable with any of the roles, whether in a more offensive or defensive role. The most important thing is the team.

The Eagles’ Captain is confident ahead of the showdown against Iceland, as he confessed that he would like his team to stay long in the competition.

“I have not given up hope inspite of the disappointment of that loss.

We are training hard to make it out of the group.

Hopefully things will work out for us on Friday.

“We have enjoyed Russia so far. We have been able to work and train well. The training facilities, hotel and the people have been great.

We hope to qualify and stay longer here so we can get to know more places in Russia”, he disclosed.