Russian women under fire over romance with fans 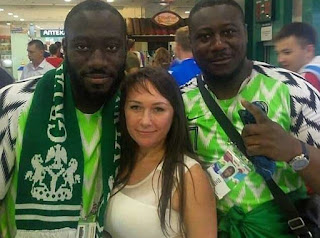 With just over 2 weeks to the end of the World cup, Russian women have come under heavy criticism for allegedly flirting with foreign fans that have converged from far and near for the fiesta which ends on July 15.


The criticism which came from a well known columnist and Psychologist Platon Besedin, has generated a lot of reaction from the women with some insisting they have a right to get down with anybody they like.

The 32-year-old author railed against ‘the corruptibility of Russian young women’.

He wrote in Moskovsky Komsomolets: ‘Social networks are overloaded with videos where young and not quite young Russian women are behaving like overused prostitutes with low social responsibility” adding that it is clear that majority of them are doing so for money and others for a chance of getting married

‘Escort services have raised their prices. And some are ready to sleep with a foreigner for free. Just because he came from [abroad].’

He claimed: ‘Russian women courting foreigners have abandoned concepts of shame and morality from their minds.

‘We have raised a generation of wh****, ready to open their legs as soon as they hear some foreign language sounds” the apparently worried columnist added

A petition posted by Cosmopolitan writer Snezhana Gribatskaya has however collected more than 6,500 backers demanding apologies from the newspaper ‘for insulting Russian women’

Some of women who reacted appear however to have provided a reason for the embracing their new passion while the world cup lasts.

One angry commenter, Yulia Skulkina, wrote: ‘I don’t understand why a woman can’t choose herself who she should have sex with…

‘Maybe Russian girls fall in love with foreigners because they behave like men, and not just hold a bottle of beer and retch during the championship?’Foreigners smile, court women, and let them feel themselves.’

Svetlana Zhukova wrote: ‘I am signing this because every woman has a right to be in charge of her own body.

One of the several pictures dished out alongside the report by Mailonline shows one Russian woman sandwiched between two men in the Nigerian jersey that was voted the most attractive in Russia 2018.

The fashionable jersey did not however turn out to be a good omen as the Super Eagles crashed out in the group stage after losing to Argentina and Croatia respectively while defeating Iceland 2-0 thanks to a double from Leicester City forward Ahmed musa.