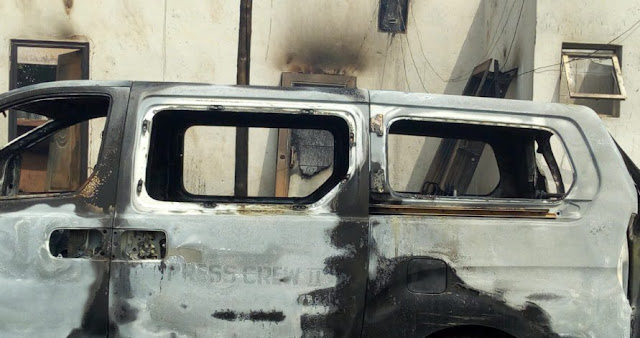 A mid-day fire on Thursday gutted the official residence of the Imo State Deputy governor, Eze Madumere, at the Commissioners quarters in Owerri.

The fire, which started at 1:30 p.m. completely razed the bush bar and bus assigned to the press unit in the Deputy governor’s convoy, as well as other valuables worth millions of naira.

The fire, according to eyewitnesses, started from a nearby bush behind the fence of the lodge which was set ablaze by unknown persons.

But for the quick intervention of fire fighters from the Imo State Fire service and the domestic staff, the entire buildings would have been razed.

The deputy governor was away on official assignment to Abuja when the incident occurred.

The Chief Press Secretary to the Deputy governor, Uche Onwuchekwa, in a statement issued shortly after the inferno was put out, said “this afternoon, some part of the Deputy Governor of Imo State, Prince Eze Madumere’s official residence was gutted by fire.

“The fire incident which is suspected to have been triggered off by nearby inferno in the bush, which eventually spread to the visitors waiting hall, razed down the entire building, a bus stationed within the premises and other valuables estimated to worth millions of naira.

“The raging inferno would have spread to the main building but for the quick intervention of security attachés who were later joined by the men of fire service who promptly helped to bring the incident under control.

“The Deputy Governor has called for further investigation into the immediate and remote causes of the incident so as to prevent future occurrence.

“Prince Eze Madumere while regretting the ugly incident however expressed gratitude to God that no life was lost.”