A+ A-
Print Email
Political leaders in Benue State have responded aggressively to the killings of their citizens by Fulani herdsmen. 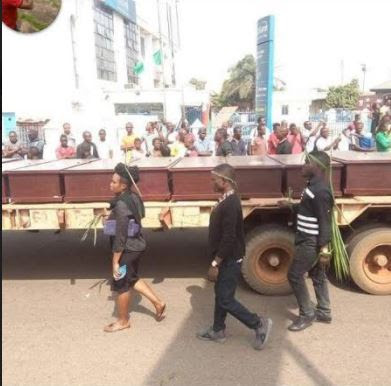 The leaders and elders averred that if the carnage is left to continue against the people, they have no choice than to raise armies to protect people of the state.

They gave thie warning on Thursday at the mass burial of the over 73 persons recently killed by herders in Logo and Guma LGAs.

Speaking during the event, elder statesman and member of the Northern Elders Forum, Elder Paul Unongo, called on the federal government to stop the madness with immediate effect.

Unongo, who ‘roared’ on the top of his voice, vowed that it would not take him and other leaders two weeks to raise an army to confront the attackers.

“I am Paul Unongo, the spiritual leader of this land, if this carnage continues, we shall raise an army within two weeks.

“We say enough is enough. We shall not continue to fold our arms and watch our people being maimed and murdered by this heartless people.

“I want to be heard clearly. This is a deliberate pogrom against our people and we shall act if it does not stop.”

On his part, elder statesman and former military governor of Plateau and Kastina States, Gen Lawrence Onoja, described the attacks as genocidal conspiracy against the people of the state.

Gen. Onoja, who spoke on behalf of the people of Benue south at the event, asserted that people of the state have contributed enough to the peace and development of Nigeria and should be respected.

“Just like our father, Paul Unongo had clearly said, enough is enough. Some of us sacrificed our lives to fight for the unity of Nigeria during the civil war in the 60s.

“We shall lead the army against them if it gets to that.

“This genocidal conspiracy against our people must stop. We cannot continue to watch our people being killed and butchered by these herdsmen.

“President Buhari is a man of integrity, this is the right time to prove to us that he truly has integrity,” Onoja said.

He said Benue people have been pushed to the wall despite their contribution to the country.

“We want to sound this loud and clear. No one has the monopoly of violence. We have being pushed to the war and left with no choice than to retaliate.

“Before we get to that stage, the federal government should stop the madness.”

On his part, the Tor Tiv, HRM, Prof James Ayatse, declared that the blood of those murdered would continue to cry out against the attackers.

He called on President Buhari to call the herdsmen to order.