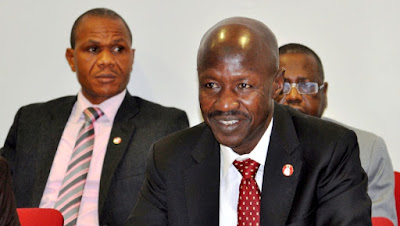 The Nigerian National Assembly has launched a fresh plot for the removal of the Acting Chairman of the Economic and Financial Crimes Commission (EFCC), Mr. Ibrahim Magu.

The lawmakers made the demand for Magu’s exit at a dinner with President Muhammadu Buhari on Wednesday night.


There were indications that the Assembly might use the removal of Magu as a condition for the consideration of all outstanding appointments in the Senate.

The latest onslaught by the National Assembly has however created anxiety in Buhari’s camp because of the stalling of the confirmation of the appointment of over 45 nominees in the Senate.

But Buhari, who listened calmly, allegedly glossed over the request for Magu’s replacement.

According to reliable source, who spoke in confidence with our correspondent, a Senator from the South-West re-echoed the need for the removal of Magu at the rapprochement dinner.

It was learnt that the Senator was supported by a principal officer of the House of Representatives who was hitherto an ardent supporter of Magu.

The top source said: “The face-off between the Executive and the National Assembly over Magu reared its ugly head again at a dinner the President had with the principal officers of the legislature.

“What was meant for a new rapprochement by the two arms was turned into an agitation session with a Senator from the South-West demanding the sack of the Acting EFCC chairman.

“The Senator wanted to know why the resolution of the Senate on Magu was not complied with.

“Although a principal officer from the House of Representatives actually backed the Senator, the President was non-committal. He actually glossed over the request.

“The lawmakers felt a bit shocked that the President was not forthcoming on their request.”

“Apart from the concern over Magu, a principal officer of the House of Representatives also shocked the President on how he raised issues over non-appointment of members of the All Progressives Congress (APC) into key positions.

“The affected principal officer said lack of empowerment of APC members was making loyalty to the government difficult.”

Findings however revealed that the President was “non-committal” because there are more than seven suits in the court over Magu’s continued stay in office.

A presidency source said: “By his nature, the President does not act on the spur of the moment. He takes decision after considering all angles to it. He is always saying that he will account for his action in the Hereafter. He likes to be fair to all based on empirical evidence.

“It is also subjudice for the President to make comments because the row over Magu’s confirmation has generated many matters in court. The lawmakers ought to know better on this.

“The presidency is awaiting pronouncement by the court on this appointee. In the spirit of fairness, the President has no choice than to allow the status quo to remain. In fact, the Senate is a party to some of these cases.

“Beyond the cases, there were other issues which cropped up including allegations against Magu which the President discovered were unfounded.

“Although some forces in government wanted Magu out, there is also international dimension to it. Some donor agencies and a few countries collaborating with Nigeria on anti-corruption war were okay with the performance of Magu.

“The President must weigh all options because the Magu saga is at the heart of the anti-corruption campaign which has defined this government.”

But the National Assembly, especially the Senate, might go back to the trenches against the Executive over Magu.

It was learnt that the Senate might not immediately decide the fate of over 45 nominees from the Executive because of its outstanding concern over Magu.

It was gathered that the latest development has made some strategists of the President to meet on how to find political solution to the “row” over Magu.

One of the key strategists said: “We are aware of the plot to stall the confirmation of these appointees since August but we will lobby the Senate to have a rethink.

“The grouses of the Senate against Magu should not be tied to other appointees’ confirmation. We believe the President has started the rapprochement and the two arms will find a common ground.

“Even the row over Magu is resolvable if the two arms can strike a political compromise.”

Some of the appointees awaiting confirmation are those of the National Pension Commission; the Code of Conduct Bureau (CCB); the Independent Corrupt Practices and Other Related Offences Commission (ICPC); the new CBN Deputy Governor and members of the Monitoring Policy Committee (MPC); Chairman and chairman of the Board of Federal Roads Maintenance Agency (FERMA) among others.

Others are Aishah Ahmed as new Deputy Governor of the Central Bank of Nigeria (CBN) and members of the Monetary Policy Committee of the CBN including Adeola Adenikinju; Aliyu Sanusi; Robert Asogwa and Asheikh Maidugu .