A+ A-
Print Email
Soldiers fighting Boko Haram insurgents in the North East have revealed details about the mass killings of their colleagues due to poor firepower and inadequate equipment to combat the insurgents.

The soldiers in their lamentation said that efforts to clear remnants of Boko Haram fighters fleeing the Sambisa forest for safe haven in Maiduguri, the Borno state capital were being frustrated as they had to most of the time put their lives on the line. 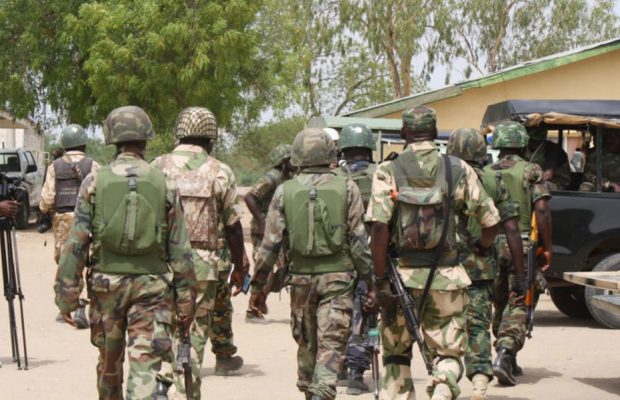 Lamenting further on their ordeal, a soldier, who pleaded anonymous said on Thursday that, contrary to claims by their superiors that there was laxity among the soldiers in the ongoing fight to totally defeat Boko Haram, the soldiers are always battle ready to face all kinds of situation that demands their calling, but are often frustrated when what they have to confront the insurgents cannot in the real sense carry out the task.

According to him,"Enlisting into the Army, every foot soldier knows his duty. To go to any operation in defence of his or her country. Fighting Boko Haram is like any other war that needs all the support and equipment. But in a situation whereby a soldier is left with only AK47 rifle, which has a shooting range of 33m to face a Boko Haram fighter using AA, you know, there is definitely no win for the soldier. AA can travel thousands of meters and with that; they can bring down a soldier. A soldier’s rifle cannot bring down Boko Haram that is not within its shooting range.”

He said, very few of them, who were deployed to fight Boko Haram insurgents, who arrived the theatre of war on January 10, 2012 are still alive today. “I have buried many of my comrades in trenches in Gumbali, in Benisheikh, in Bama and in Konduga. I have been posted from one battle front to another. Many of us who have no godfather in the army have to face this. They send us to go and die, some of us that died have been buried with no proper military burial. Their families are yet to know whether they are alive or dead. The military has no proper record of those who died in this ongoing military campaign against Boko Haram.

"Like I said, we buried hundreds tagged unknown in our trenches. Look at this picture in my handset. These are soldiers, who died and were lucky to have been evacuated for proper burial. Some of them, whenever their families call, they would be told that they are in the bush fighting. But the truth is that, they have been killed not because they do not know how to fight, but very often, because they have no enough firepower when they came under attack,” he added. 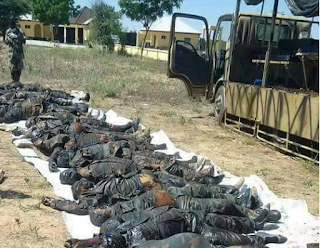