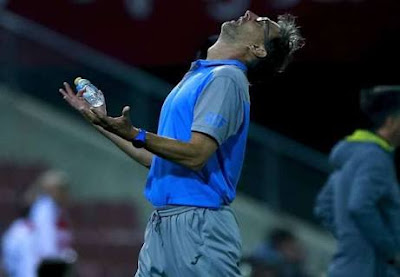 Tony Adams' Granada have been relegated from La Liga following a 2-1 defeat to Real Sociedad.

Goals from Carlos Vela and Juanmi either side of Adrian Ramos' header secured the win for the home side at Anoeta and sealed the visitors' fate with three matches left to play this season.
They sit 19th in the table, two points above already-relegated Osasuna and 10 points adrift of 17th-place Leganes, who have a game in hand.
The defeat was Granada's 23rd of the season and their fourth in the four matches since former Arsenal captain Tony Adams was appointed as head coach on April 10.
The 50-year-old vowed to give the players "a kick up the a***" upon his appointment but conceded this week that relegation to La Liga 2 was almost inevitable.

Adams' side have conceded nine times and scored only once in his four games in charge and fans staged a mass walkout when Sandro Ramirez struck his second goal in second-half stoppage time in the 2-0 home defeat to Malaga on Tuesday.
However, Adams insisted this week the long-term future of the club was positive as they look to strengthen their playing squad and appoint a sporting director before next term.