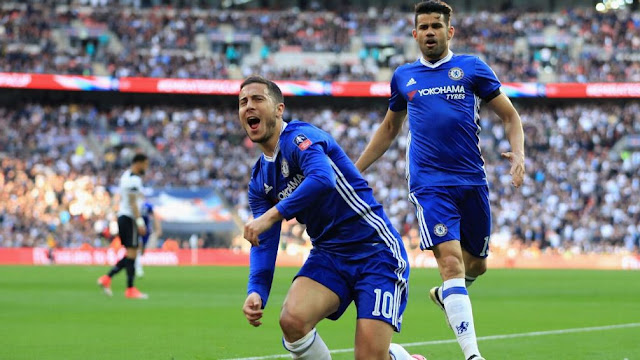 Eden Hazard came off the bench to help inspire Chelsea to a 4-2 victory over Tottenham and send them into the FA Cup final.


Willian opened the scoring for Chelsea in the fifth minute with a brilliant free kick that sailed past the wall and into Hugo Lloris' far corner.

Tottenham, though, drew level after 18 minutes when Harry Kane connected superbly with Christian Eriksen's cross to send a backwards header into the bottom corner.

Chelsea were back ahead two minutes before the break, with Willian sending Lloris the wrong from the penalty spot after Son Heung-Min had tripped Victor Moses inside the box.

Seven minutes into the second half, however, and Tottenham were level again, with Eriksen picking out the run of Dele Alli with a fine ball before the midfielder then half-volleyed into the top corner.

But 15 minutes from the end, Hazard scored Chelsea's third, picking up the ball on the edge of the box after Tottenham cleared a corner and then drilling an effort into the bottom corner.

And five minutes later, Nemanja Matic made sure of the result for Chelsea, receiving the ball from Hazard before thumping a stunning first-time effort into the top corner.