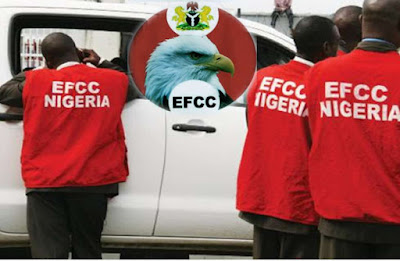 The Economic and Financial Crimes Commission has arrested two serving commissioners in Enugu State in connection with investigations into the $115m (N23bn) allegedly disbursed by a former Minister of Petroleum Resources, Diezani Alison-Madueke, during the build-up to the 2015 presidential election.

Besides Egumgbe and Mba, the chairman of the PDP in the state during the 2015 elections, Chief Ikeje Asogwa, was also arrested by the anti-graft agency over the matter.

Asogwa is currently the chairman of the board of Enugu State Universal Basic Education Board.

The EFCC official revealed that the trio – Egumgbe, Mba and Asogwa – were detained, and later released on bail.

Responding to questions by journalists, Babalola said, “They were detained, they made statements and they were later released on bail.”

According to him, the EFCC is still investigating former Enugu governor, Sullivan Chime, who was alleged to have received N450m out of the N23bn disbursed by Dieziani Alison-Madueke.


When Chima was initially quizzed by the EFCC over the campaign fund, Chime reportedly told detectives that he handed over the money to the secretary of the campaign office, Mba, who was also the state’s Commissioner for Special Duties and Inter-Government Affairs at the time.

Chime allegedly explained that the money was brought by two of his former commissioners, Joe Nmamnel and Mba, in company with Asogwa and a PDP chieftain, Prof. Osita Ogbu.

The former governor was said to have stated that he gave the money to his orderly for safe keep, with instructions that only Mba should have access to it to facilitate her work as secretary of the campaign office.

Babalola added that the anti-graft agency was also investigating how about N450m of the N23bn was disbursed in Abia State.